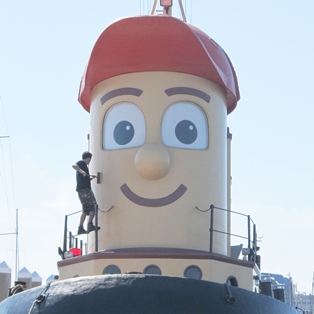 Theodore Too, the tugboat, lives at Murphy’s Cable Wharf, but she was docked in Fernandina Beach, Florida this morning, after traveling a solid 94 hours.

Theodore Too is on his way to Winterfest Family Day in Fort Lauderdale, Florida.

Theodore Tugboat’s creator, Andrew Cochran, came up with the idea one afternoon after seeing two tugboats and a container ship positioned so they appeared to be having a conversation. He began telling his son bedtime stories of the tugboats in the harbour.

These bedtime stories soon became a children’s television show on the CBC network. As the show grew in popularity, so did the requests for more Theodore. This lead to the development of a life-sized replica of the friendly tug who spends much of his time touring the Eastern Seaboard visiting friends and fans. 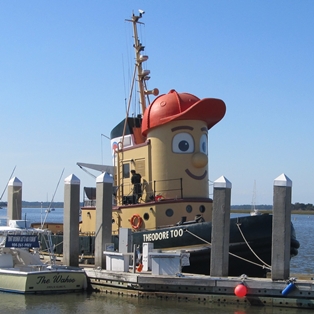 Theodore loved to visit his fans but began to long for Halifax and a permanent home. At first it seemed that no one would be able to care for Theodore Too, and he began to worry that he would never have a home.

When Murphy’s Cable Wharf heard about Theodore’s troubles, they stepped in. With the help of their friends and sponsors, they offered him a home and a job with their company. Theodore Too was delighted.

Here is a quick video of his stay on at Amelia Island.