Voting as a Faithless Act

Faith that the system worked, that the Democrats and Republicans chose the best among them as candidates to lead us. 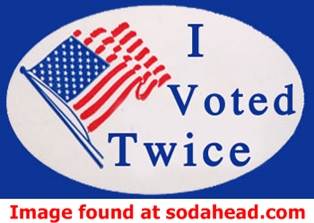 I spent my earliest years, unwisely, voting as an act of faith.

-Faith that the system worked, that the Democrats and Republicans chose the best among them as candidates to lead us.
-Faith that if I chose one of those two parties’ candidates to lead, America would continue to advance in freedom and in opportunity for every citizen.
-Faith that all I had to do was vote and the wise men in charge would take care of everything else.

I lived through the turmoil of the 60s and the 70s, and I became jaded. I no longer believed in the system. When, on rare occasions, I could find a candidate who believed as I believed, or at least seemed to, I supported them. Much more often, I held my nose and voted for the lesser of two evils, reaping evil for my efforts, and wondering where I, and my country, had gone wrong.

Often, at the Presidential level, my vote went to the Libertarian candidate, since that party’s platform most closely aligned with the principles I supported. And time after time, I watched as that candidate drew some small fraction of a million votes, the voters cowed into believing that if they didn’t vote for one of the two “approved” candidates their vote wouldn’t count. And I watched as we the people lost our power, and the politicians and bureaucrats in Washington increased theirs.

No more will I vote for the lesser of two evils, then have faith that the system will sort things out. Before I walk into that voting booth, I’ll know not only the positions of the candidates I intend to vote for, but whether their record backs up those positions. If there is any candidate I can honestly support, I’ll vote for that candidate, regardless of their odds of winning. And if there’s no candidate I can support based on their positions and their record, I will withhold my vote in that particular race.

I recognize that no candidate is perfect; I also recognize that some candidates are less awful than others. But no longer will I ever vote for a candidate on the basis that the other choice would be even worse, and somehow the system will correct for their deficiencies.

No more voting on faith; faith in the politicians who make promises their record plainly shows they won’t keep; faith in the choices of the Democrat or Republican parties, just because the media tells me no one else can win; or faith in a system that has plainly shown it won’t correct for the failings of the candidates it offers me.

From now on, my vote will unerringly be for those candidates who I think, from examining both their records and their positions, will promote the causes that matter the most to me.

No more voting as an act of faith; my votes will be faithless, based on my knowledge of the candidates, the issues, and nothing more or less.