A story about the general public's lack of knowledge about precious metal. 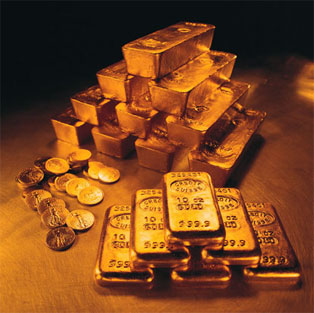 As much as I like the Wall Street Journal, I have to say the paper is completely “gold ignorant.” Totally clueless about gold. (silver too). For proof dear Fernandina Beach citizens have a read of their latest bear piece on gold. The article paints gold bulls as paranoid lunatics worried about runaway inflation, civil unrest, and a dollar collapse. It claims gold is a lousy investment. What their journalist doesn’t understand is that gold isn’t really an investment. It’s money. Real money. The journalist also doesn’t understand gold is rising because smart investors are buying it as a sort of “third currency.” An anti-paper currency that governments cannot debase on a socialist whim. I enjoy reading articles like this. The more ignorant the public is of a bull market, the longer it has to run. And I’m long.

“Gold is a Lousy Investment” by Dave Kansas‚
Gold, like other commodities, is a notoriously volatile and fickle investment. It has enjoyed periods of very high interest from investors, followed by long bouts of absolute indifference. Today, it is having one of the former, shining brightly in an otherwise tumultuous investment environment.
The question for investors: Will gold remain bright or not? More long term, what role should gold play in an investor’s portfolio? The answer to both questions might disappoint the growing golden horde.
Gold has had a terrific run. Since 2005, its price has essentially doubled — something few other assets can claim. But the surge in gold prices masks some underlying realities. Gold’s long-term track record isn’t great and the metal has a penchant for huge, long swings that can burn investors. That’s a reason to be cautious about gold’s current clarion call.

Peak in the Early 1980s
During the late 1970s, not long after the U.S. went off any semblance of a gold standard to back its currency, gold skyrocketed, eventually reaching about $850 an ounce in 1980.

The thinking at the time seemed straightforward. An unrelenting and expensive Cold War, untameable inflation and soaring oil prices would place huge pressure on the dollar, stocks and bonds, making gold one of the few investments that would hold its value.
The argument had some merit. The Soviets had just invaded Afghanistan, oil prices were racing toward $100 a barrel and the stagflation days of the 1970s were fresh in the mind.
But what happened? Gold prices plunged.
Gold skidded from $800 an ounce over the next few years and didn’t see that level again for nearly three decades — and on inflation-adjusted terms we remain well off that mark even today. Gold investing became a fool’s game, a land of dead money. Instead of the world unfolding as gold bugs expected, the Federal Reserve tamed inflation, the Cold War petered out and oil prices dropped into the $10-a-barrel range.
In other words, investing in gold may sound simple, but history tells us it’s anything but.

What drives gold prices? It’s an alchemist’s mixture of fundamentals and fantasy. Gold certainly has industrial uses and it’s a hot item for purchasers of jewelry, especially in India.
But fundamentals don’t support the soaring gold picture of late. As Carl Weinberg, chief economist at High Frequency Economics, a Valhalla, N.Y., research firm, notes: “Industrial demand for gold surely is depressed — along with demand for other industrial materials — and jewelry demand must be hard-hit by global recession.”
Adding to the fundamental doubts about gold’s surge is the performance of other commodities. Wheat, corn, nickel, copper and stainless-steel prices have all declined from highs reached ahead of the global financial crisis.

Gold, however, has simply marched higher with barely a pause, smashing through $1,000 an ounce early in September before a recent retreat.
That brings us to the fantasy half of the equation, which seems to be the main driver of gold today. Gold is the asset class of choice for those who fear grim tidings ahead. A collapse in the dollar. Runaway inflation. Civic upheaval. Some gold bugs talk of stockpiling seeds, bullets and canned goods. It can get a little Area 51.

As with many fantasies, there’s a whiff of possibility to some of these fears. The dollar is under pressure for many reasons — soaring deficits, the lingering effects of the financial crisis — and some countries have called for a new reserve currency.

Inflationary fear also has some merit. Central banks have dropped short-term rates to near zero, the financial system is being flooded with money and governments are spending with abandon. Surely this all adds up to inflation? Well, probably not anytime soon. The enormous amounts of idle capacity — from factories to workers — make the elements of inflation tough to cobble together.
Don’t Expect Civil Disorder
Civic upheaval? Despite the acoustic device battles with protestors in Pittsburgh during the G-20 meetings, the notion of collapsing civic order seems increasingly far-fetched.
The interest in gold does stem from some fundamental issues, namely inflation and concerns about the dollar.
For inflation, investors would be better served investing in Treasury inflation-protected securities, or TIPS. The risk of TIPS declining dramatically and becoming dead money for decades is exceedingly remote. Moreover, even if inflation doesn’t surge, TIPS can still be a good store of wealth, while gold could do just the opposite.
As for real pressure on the dollar, a more prudent strategy would be to invest in companies based overseas through an international or emerging-markets mutual fund or exchange-traded fund.
A weaker greenback would make the stock-market performance of foreign companies stronger when those gains are translated back into the U.S. currency.

Please write to Dave Kansas at dave.kansas@wsj.com and let him know he’s clueless.