Warrior Vacations is having its first Summer Fundraiser on June 5th at Sears Homestores on 14th St. Come and support the cause. 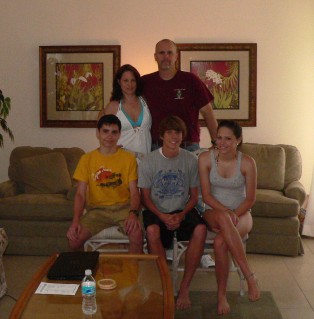 The Singletary Family on Vacation

Around this time about 3 years ago local attorney Robert Peters took off a year from  his practice to take his family of 5 for a year long trip around the world.

No, not a vacation. That’s what everyone immediately thinks when someone suddenly decides that there is more to life than just slaving at a job. Having a job is one necessity to make sure you can afford to live these days, but people like Robert and his wife Jodi never really stop. Not at one job at least. If most people work around 2000 hours over a year (250 days x 8 hours), Robert probably puts in 4,000 hours (313 days x 13 hours) and in 2007 he decided to take his wife and 3 children on a “mission” trip to discover some essence about the world and the human race.

And during this trip he came up with the thought to build an organization that would offer active duty returning military personnel a chance to reconnect with spouse and children in a vacation environment. Warrior Vacations was born in the fall of 2008 here on Amelia Island and has been offering free vacation home accommodations to a growing group of service men and women, who understand and appreciate the chance to reconnect after the enormous pressures of being separated in wartime arenas.

In a separate development we learned from Jacksonville based Family Nurturing Center of Florida, which is planning to open a facility in the Yulee YMCA later this fall, that returning military and their families are a large percentage of the recipients of their supervised parenting services, which made our commitment to lend a helping hand even stronger.

When SearchAmelia first learned about this initiative from Robert about 10 months ago, we offered support on the level we’re best at which is the internet  and a website was re-designed. The next step was worked out as giving the organization a wider awareness and exposure which required more vacation units to be included into the program.
The thought quickly developed that if we could get the entire coastline of Florida involved in this worthy cause, we could take Warrior Vacations to the next level. 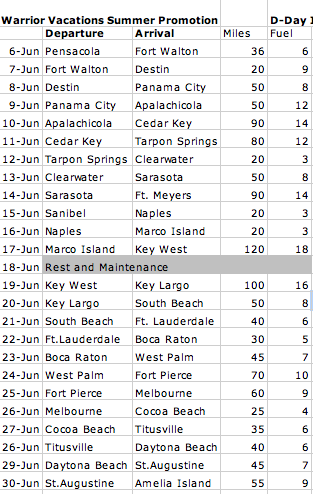 Ready and Set to Go

How about a coastal trip that would take us from Pensacola to Key West and back up to Amelia Island, with a stop in every beach community that offers private vacation accommodations? That would probably generate a couple of thousand units for the Warrior Vacation program, especially since the time donated is tax deductible for the unit owner.
Bending over all the logistics and organizational requirements, the legal structure with the Journey Church’s “Authentic Impact” initiative fit the 501 (c) 3 requirements and opened the door to further developing the program with timelines, financial requirements, volunteer organization and press and public relations preparations.

We decided that a symbolism could work well if we could organize the Awareness Campaign around a historic and heroic military effort which we found in D-Day’s 1944 Operation Neptune, the assault phase of the Operation Overlord, which would require for us to be ready to start on June 6 and finish the Campaign on June 30, matching the daily naval landing operation on the French Normandy Coast.

In March we were in the time line to operate a daily landing in 24 coastal Florida communities that fit the profile of vacation destinations with condo availabilities.
The Awareness Promotion is organized in a Ocean going team and a Road Based Support team.
The Ocean going team departs daily for a 4-5 hour boat ride to the next destination, filming the Florida Coastline and blogging about the previous day results in attracting units to add to the Warrior Vacation inventory.
The Road Team organizes daily press and presentation meetings in the next location and takes care of all the logistics.

A budget was established to include all expenses for boat, road transport, accommodations, fuel, launch and finish parties, travel expenses for invited speaker veterans, communication and press information expenses at $2,000 a day or $48,000 for the entire 24 day Awareness Campaign and a Sponsor package with sponsor levels and benefit programs was finalized [download id=”29″] and then…..

BP did not cap off a new 5,000 feet deep oil well correctly… and for the time being our Awareness Program is back in the sandbox.
Over the past 6 weeks have been contemplating doing alternative routes or maybe only from Key West to Amelia Island, but somehow it doesn’t feel right, so rather than half ass, we are going ahead with a series of fundraisers to secure the funds that will allow us to pursue this very worthy cause.

This Saturday June 5, at the Sears parking lot on 14th St. we’ll have our first Fundraising event for the Summer with a ton of attractions, surprises, entertainment, food and activities; but most of all with a TON OF RAFFLE PRIZES.

You can purchase $5 and $20 raffle tickets at Sears at either 1100 South 14th Street in Fernandina Beach or at their St. Mary’s location on Hawthorn Lane. The $20 tickets qualify for the Grand Prize Raffle and the $5 tickets for the Donation Raffle. Cash donations are also accepted as are donated prizes to add to the raffle drawings.