We Found a Cheap Orlando Motel Near Disney

We checked in for our two night stay and including tax, title and insurance we were out the door, with keys in hand, for less than $90.00. 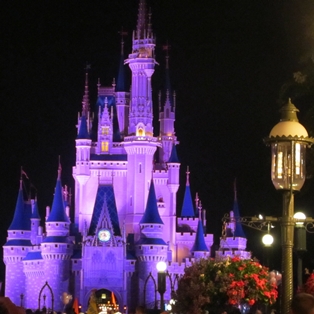 I recently took my five year old grandson and his teenaged aunt on a trip to Disney World’s Magic Kingdom in Orlando, Florida, on a very tight budget. At first I wanted to stay in one of the resorts so we could see the fireworks and night water parade from our room, but after researching hotel prices, (the least expensive was $305.00 per night) camping in a tent at Disney’s Fort Wilderness Campground was the only viable option. Yes, it was mid July and high temperatures and afternoon thunderstorms were indeed a concern; but we could cook marshmallows over a fire with Chip and Dale and see the lighted boat parade. Still, $66.00 per night in a tent was pricey considering there would be no relief from the high humidity and the mosquitos for two nights.

Next, we found Disney’s All Star Movie Resort property for $124.00 per night that included giant cut-outs of a 30 foot Woody and a 47 foot icon of Buzz Lightyear from Toy Story. That would be exciting, but we would have no view of the parade and there would be no marshmellow cook-out with costumed characters. Surely, I could find something with air conditioning, that included a free shuttle to the Magic Kingdom, priced between the $66.00 and $124.00 each night; so I kept looking. 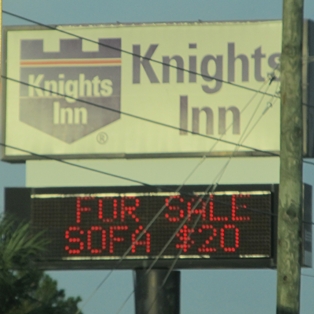 I looked on Priceline.com, but wasn’t comfortable with committing to a hotel that was un-named. I found some rooms on Hotwire.com as well, but nothing priced in the middle. The more I thought about it, the more I realized that if I saved money on the room, we would have more money to spend inside the theme park on souveniers and ice cream.

After much thought and consideration about our lodging arrangements, and visiting my mother’s home in Palatka, Florida, we left armed with a box of cereal, a few snacks and directions to the Knights Inn Main Gate Motel, on 192 in Orlando. The rooms were listed at $32.00 per night. They advertised rooms that were recently renovated, included a free shuttle to the park, had free internet, a swimming pool, and a free continental breakfast. How bad could it be, right?

On our way to Orlando, we stopped at Winn Dixie purchasing some milk to go with the cereal, and chicken and salads for lunch, confident we could keep them fresh in our cooler, not knowing if our “economy conscious” room would have a fridge or microwave. Concerned that $32.00 was too good to be true, we decided after we checked in, we would figure out what to do about dinner and breakfast the following morning. 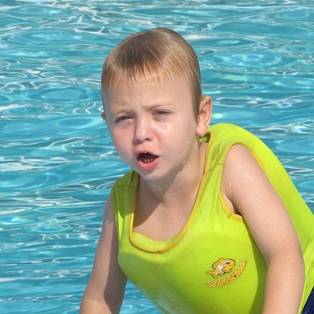 The MapQuest directions were perfect and we pulled up to the lobby. The grass hadn’t been cut for a few weeks and there was some trash littering the parking lot that was practically empty. In many people’s eyes, this place was a dump! My 16 year old daughter pointed out a family happily swimming in the sparkling pool as we got out of my car. “What do you think?” I asked. “Can you handle staying here?”

We checked in for our two night stay and including tax, title and insurance we were out the door, with keys in hand, for less than $90.00. We drove to the next building down from the lobby and entered our room. The room was suprisingly clean with an ample supply of fresh towels.

Recently renovated obviously means they painted over the old wallpaper, because the wallpaper that was separating from the wall WAS freshly painted! I pushed the broken tile in the bathroom back against the wall covering a small hole in the bathroom. The air conditioner ran constantly, most likely because you could see daylight entering the room all around the front door, but it locked securely so we felt safe. 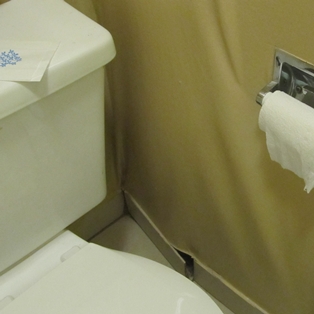 The internet was super fast and we had cable television, but no remote control. I couldn’t get a dial tone on the telephone, so I figured a “wake up” call was out of the question. The alarm clock was about five hours off, and had no battery backup, so the teenager set the alarm on her cell phone; all was good.

Ally chose dinner at Taco Bell, which worked out well on our budget. The room was equipped with a dorm-room sized microwave and refrigerator, so we had chicken and taco leftovers for the following night’s dinner. With a five year old in tow, we weren’t sure how long we would be at the Magic Kingdom, but if we came in late, at least we had dinner under control.

I picked up a few extra sporks, napkins and straws at Taco Bell once I realized I had only Solo drinking cups in my trunk. The cups would work for a bowl of cereal since the free continental breakfast only included coffee, orange juice and donuts (while they lasted). 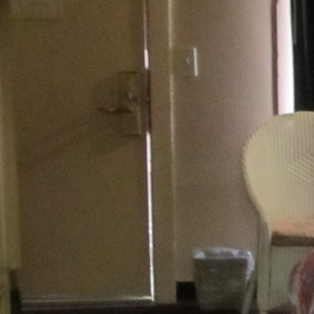 Gap Around the Door

After a dip in the pool we settled into the room for the night. While Jason dozed off, Ally and I discussed the free shuttle. It only left to the theme park at 8:15 AM and returned to the hotel just twice; at 8:30 or 10:45 PM. We decided to pay the $15.00 Disney parking fee for the day and drive to the park once we learned a cab ride would cost about $20.00 if the shuttle didn’t work out for us. Which, as it turns out, the FREE shuttle did not work out, because the kids slept later than expected the first morning. When they did wake up, they popped out of bed, brushed their teeth and practically bounced to the lobby for breakfast. They returned with two of the tiniest styrofoam cups I have ever seen. One with orange juice for Jason and the other one was about half full of coffee, for me. “That was the last of the coffee.” Ally told me. “And there was no food at all.” So we pulled out the Solo cups and sporks, and enjoyed boxed cereal and ice cold bottled water for breakfast.

As it turns out, we spent nearly 13 hours at Disney’s Magic Kingdom. The kids were wonderful the entire day and we stayed through the light parade, the laser light show and the fireworks over Cinderella’s castle. Jason, the five year old, exemplified what Walt Disney must have had in mind when he envisioned his themed parks. The day was indeed full of wishes that came true, the magic of special effects and dreams that will last a lifetime!

While we were out, housekeeping did a wonderful job tidying up our room and replenishing linens. If you can handle a bit of imperfection, the Knights Inn Main Gate, well, honestly, for the price – it was just fine!