Weibel and Thibaud too Strong for Competition

European Champion Claudy Weibel and New York partner Xavier Thibaud were too strong for the rest of the Petanquers in the Amelia Island Pétanque America Open last weekend. 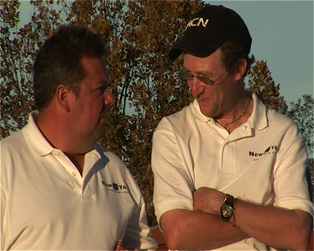 European Champion Claudy Weibel and New York partner Xavier Thibaud were too strong for the rest of the Petanquers in the Amelia Island Pétanque America Open last weekend. 2000 World Champion and 2009 European Shooting champion Claudy Weibel was in his element with precision playing partner and friend Xavier Thibaud from the New York Pétanque Club. The strategic ease with which this couple worked themselves quickly into the finals of this first tournament on Amelia Island, was nothing short of amazing.

The tournament director Christophe announced during the opening session that the time limit for all games except the finals would be 1 hour 15 minutes. Team Weibel/Thibaud never went beyond 45 minutes. Thibaud would place his first boule frighteningly close to the target (piglet) and whenever the competing team would threaten his position, Claudy Weibel would step in and without any hesitation whatsoever kick the other team’s ball away from the target and with top spin effect land his own ball right near the target.
We watched the audience gasp and shake their heads in disbelief every time he stepped into the ring. Susan Hurley, event coordinator for the City of Fernandina Beach and an enormous support in the successful conclusion of this first tournament stood next to my camera during the semi-finals and even with my eyes on the view finder I could see her shaking her head and blowing out compressed air every time Claudy Weibel kicked another ball out.

It is said in the game of Pétanque that you do not need to know how to shoot (kick other balls away from the target) to win the game. True as that may be, you better not get someone like Belgian Claudy Weibel as opposition, because you’ll pull your hair out after a while.

With 88 teams from Europe, Canada and the US (many in US teams were from other countries such as Morocco, Tunesia, Madagascar and Central America) the tournament followed a round robin game system that would guarantee the finals to be able to start on Sunday afternoon around 4 with enough daylight left to finish the game with floodlights and give everyone ample time to spruce up for the closing party and prize ceremony at Sandy Bottoms that evening.

The finals started at 4:20 and by 5:10 it was all over, not because runners-up Malik Ernesto and Gilles Ray from the New York Petanque Club, are not fabulous players in their own right, Weibel’s magic shooting and Thibaud’s uncanny precision in landing his boules near the pig were no match for anybody on this day. The final score 13-3.

Aftermath: With Mayor Susan Steger announcing that part of the boat trailer parking lot will be featuring Pétanque courts for the near future, you can now see locals getting out their boules and play until far after sunset under the floodlights. With the second weekend in November being proclaimed by the city as Pétanque America Days and with Petanque courts sprouting up in front and back yards on the island, we can safely say that in next year’s tournament we will see some local talent vying for the prizes.

With more than 4 hours of video footage of the entire Amelia Island Pétanque America Open Tournament on November 14 and 15th, a 90 minute video of the games and the parties will be available in about 3 weeks.