Local Producer Rick Traum shakes up retirement once again, with co-executive producer title in a 2 hour documentary on the magnificent theatres of the early 1900s 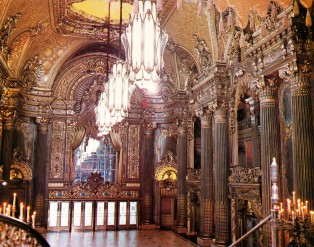 I think it is time for an Intervention. Rick Traum, who landed with his wife on our island a couple o2 3 years ago, to enjoy retirement from the East and West Coast Rat Race he said, has apparently embarked on a dangerous spree of media related profiling. I first met Rick and Nadine when we tried to structure an ailing City TV Channel that operates on Comcast 29. After 6 months of sweating too many unimportant details, which is not productive for our way of operating and getting things done, we both moved on.

A bit later Rick and Nadine turned up instrumental in the filming of Indie Movie “The Diary of Preston Plummer”, which is slated to come out soon. Until that venture, Rick seemed at ease with his lot of being the industry’s “Eminence Grise” for Amelia Island, in all matters of film and TV productions. Obviously, with several major National production awards in his pocket, collected over a lifetime career with NBC, Radio City Hall and other movie production outfits, Rick became quickly the go-to-man when someone mentions video or film on island.

But apparently that lifestyle was not hectic enough for Rick Traum as I just received word that he has been appointed Co-Executive Producer for one of the most exciting documentaries conceived this side of Hollywood – in my opinion.

In a nutshell the project is a 2 hour documentary type tribute to the Theatres that were built in America in the 1920s and 30s. Those exotic fantasies that were designed and decorated to intentionally transport its audiences into a world of fantasy. These palaces were designed to leave your worries behind outside on the street. Once through that door to the inside, the big bad world outside could not reach you for at least 2 hours or so.

On a personal note, when I arrived in this country for the first time 31 years ago, I was in awe of the Broadway Theatres of Old and gazed at Radio City Music Hall from my hotel room across the street. When I moved to Atlanta, I visited the Fox Theatre at least once a month, even though it had been reduced by that time to giving the stage to Rock bands. These grand buildings were the first one I thought of when yet another person whined about having so little history and culture in this country.

Rick Traum shared responsibility in Popcorn Palaces is to show the world the magnificence of these buildings before yet another greedy developer or city council makes a move to render them useless. And even though I am really a minimalist in the view of sustainability issues, these gaudy, enchanted, phony, preposterous and magnificent pieces of art breath music, laughter, dreams, and most importantly the invitation to go all out.

I will therefore let Rick Traum’s intervention go one more time, as he and a group of very accredited producers and film makers undertake the massive project of chronicling the zenith of that heady era and the years leading up to it. It is a truly lasting piece of Americana and I’m just jealous (and proud) of him.

Produced by Cinema Group LLC, in association with the League of Historic American Theatres, the two-hour, high definition documentary—intended for broadcast nationally—will make use of archival images, interviews with noted historians and scholars, as well as the memories of those who went to and worked in these architectural wonders. The documentary is to be accompanied by a comprehensive educational outreach program, a lavishly illustrated companion book, and a cutting-edge, interactive website. But it is not only about the past, according to the producers. The movie will also research and highlight the recent renaissance of movie going and the function it plays in understanding humanity and the world on a much deeper level.

Rick will be teaming up with his old colleague from the Radio City Music Hall Rockettes heydays, Bruce Michael, who started out the project with another veteran award winning designer and film maker Wally Coberg. Both gentlemen have success tracks that move like a spider web around the nation and naming all their credentials here would rob you of a pleasant afternoon in the Florida spring. So instead, you can click POPCORN PALACES – Production Team at your convenience, and find out that the producers behind the Popcorn Palaces production are a gifted bunch of award winning experts in their respective fields, who on numerous projects during the legacy history of American Film-making crossed roads with each other. No doubt the secret ingredient behind success in film making is to know you can trust every participant in the creative process to produce the best they are capable of.  And if the Popcorn-Palaces-Brochure that is produced to support the project is any measure of the quality and depth the final documentary is going to display, than American History owes these guys a big one.

Godspeed Rick Traum and this project, and please keep us informed.