What Advice Would You Have for Obama?

With former Fed chief Paul Volcker coming back to the President's foreground will this change the message in the State of the Union? 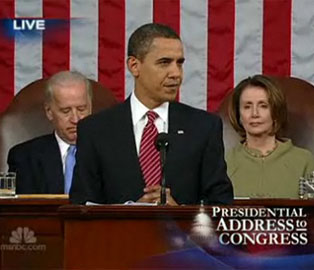 Obama and the state of the union

With the state of the union address on our doorstep a lot of us are wondering where the next year is heading. We hear everything concerning the economy today from one extreme to the other.  It’s down, it’s up, the recession is over, we’re slipping deeper into it, unemployment is up, it is down, what are we to believe?  This week the President will give his State of the Union address to Congress and the American people.  What will the message contain and how will it be viewed not only by the this country, but the rest of the world?  Is there anything he could say that would make us feel a little more confident and comfortable that perhaps there is hope on the horizon?

I believe there is such a message.  I believe that the American people want nothing more then the truth.  I think the public can and will handle the truth much better then maybe Washington thinks it can.  If you found yourself suddenly in a position to write the speech for the Presidents address, what would you write?

I think I would start by reviewing the reality of just what is going on in our economic world.  Instead of trying to skew numbers on unemployment I think it would be much better to simply say, “folks this is where we are, and it’s not pretty.”  Tell it like it is, give nothing but facts backed up by facts; this is what we the voters expect of any elected official, from the President on down.  I guess my thoughts go back to another Democrat President, Harry Truman.  I have always admired this man as he served in some very difficult times, but he did it on the terms of the people. He told it like it was, explained his thoughts for getting out of the mess and then implemented the plan, what more could you ask?  Ronald Reagan did the mostly same thing.  You can’t sugar coat reality and you can’t continue to blame it on others.  At some point you simply have to put on your big boy pants and take the responsibility given to you by the voters.  No one ever said it would be easy. So if we have to pay for decades of abuse, then let’s go back to ground zero, cut out all bonuses for everyone until we turn this economy around.

I do think to serve in the position of President you must first surround yourself with great people who can solve problems rather then create them.  I think our current President has not done that.  I truly believe his intentions were good; he no doubt thought he was putting great minds in place and some of them are. Yet other ones carry a load on their back that was created and nourished in the decision making that has led to this economic disaster. They’ll have to go. If I had to give any advice to the President, it would be to honestly re-evaluate your current administration and start cutting and adding.

I read with interest an article this morning concerning the re-appointment of Ben Bernanke to head the Federal Reserve.  Would I keep him, I don’t think so.  I’m not saying he has not been sailing in some bad weather, but I do think he should have charted a different course. Giving billions of tax payer dollars to Wall Street, decisions made between the Fed and the Treasury’s Tim Geithner, a former Fed man himself, is not the answer.  Jobs are not created on Wall Street, they are created on Main Street.  I wonder, does the administration even know where Main Street is anymore?  Tune in for the State of the Union tonight and make your own decisions.