What French Baguettes and New York Bagels Have in Common

The essence of Entrepreneurship is creating something for ourselves, much more than the dream to become wealthy. 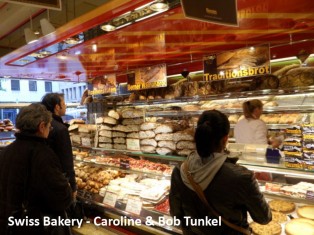 Ooh the smell and promise of a freshly baked baguette

I have been trying to find real French baguettes since I moved up from the French-Dutch island of St.Martin in the Caribbean. In France, a baguette can only contain wheat flour, yeast, salt and water. This is defined by law, and anything else cannot be called a baguette. A fresh baguette with a little real butter, real Dutch aged Gouda (even the young will do) and on occasion a dap of real Dutch Apple paste with the cheese and you are having breakfast in Paradise.

On a recent trip to NYC, I got within an inch of that dream and last night when we needed something from the Nassau Health store I noticed a display of baguettes that could be the real thing. Unfortunately the baker had already sold out for the day so I couldn’t really verify my find. I will have to do that today and let you know.

But with this experience in mind, I found myself contemplating once again an interesting conundrum: Why does one have to travel to New York for a really good baguette? As an expat with a gourmet taste I realized a long time ago, one can’t even get a New York quality bagel 200 miles outside the city! You see I’m not asking why there aren’t any good baguettes in Papua New Guinea, but really, why are there no equivalently good bagels or baguettes in an American city nearby? You may notice that I did not mention the famous New York Pizza slice, because Arte’s Pizza here in Fernandina Beach confirms the thesis of this essay, namely that it can be done, even though it seems the exception to the rule!

Foregoing observation doesn’t just apply to bagels or baguettes, of course; it’s relevant to all sorts of food. For example, I haven’t found an excellent creole restaurant outside of Louisiana. I’ve frequented some adequate knockoffs that bring me back to the memory of a better meal long gone by, but nothing that would make my jaw drop as do many restaurants in New Orleans. This seems hard to explain simply by market demand. During my twenty years on St. Martin, inspite of all the food being imported, I hardly ever had a bad experience. The 37 square mile island boosted some 400 restaurants and I could walk into any one of them and get a good to exquisite meal with real baguettes on the side.

Also, how is that I can find excellent Thai and Vietnamese food across the country but can’t get a decent order of fried catfish and hushpuppies in the northern US? While I was living in New York in the 1980s, there were – believe it or not – two Dutch Indonesian restaurants serving excellent Spicy Indonesian Rice Tables. They took me right back to being in Jakarta or Amsterdam. These places weren’t cheap imitations – they could successfully compete in the home country as well. Obviously in D.C and New York, it was easier to fulfill my cravings for Eastern European, Japanese, Korean, and Indian food than for delicacies from the Deep South that originate only several states away, but here in Florida it is even more devastating that for example in Miami or Orlando/Tampa you can get any Latin, Hispanic or Mexican dish there is, but anything else, even Southern Fried, are cheap imitations.

As I’m working more on our Nassau County Restaurant and Bar review website AmeliaBites.com, I notice that more than a few restaurants on the island have closed lately, often being replaced by yet another Mexican Restaurant. And thinking about that gave me my first clue to understanding the above mentioned conundrum.

Even though I might have a clue to the problem’s origin, I’m not sure of the possible solution.  Maybe you readers can share a comment with your thoughts.

In my opinion, we are suffering from a real lack of entrepreneurship, particularly among the lower-middle classes of American society. I cannot help but think that someone out there knows how to make that excellent baguette or bagel or Bern Walnut Bread. They’re likely waking up at the crack of dawn in NYC, San Francisco, New Orleans or even right here on Amelia Island while being paid an abysmal wage. Someone in Mississippi is frying a catfish and hushpuppies to perfection for minimum wage. There’s a saucier in New Orleans concocting mind-blowing creole sauces for not much more money. Why do such individuals not consider taking their talents somewhere else and starting a business? On a recent visit to Charleston, my wife and I were directed to Bertha’s Kitchen for a treat called Gullah Food. Amazing lunch in a clean and friendly environment for $13.42 for the two of us including the best sweet tea you’ll ever taste. Considering the line out to the street Bertha’s was making money. She must have kinfolk that have learned her secrets of flavors and are ready to start a success story of their own somewhere else? Yet it doesn’t seem so.

The first thing that comes to mind is the constraint of credit and funds. Of course, not everyone working for rock-bottom wages is going to figure out a way to start a restaurant, but I’m not asking why everyone doesn’t start a specialty restaurant. Rather why is it that almost no one starts one? It’s the reason why local cuisines don’t spread far in the US. Yet, immigrants disprove the claim of it being due to a constraint of funds. Anywhere in Northeast Florida you can get pretty authentic Mexican food. So my observation is: If recent immigrants who can barely speak English have opened up restaurants, it’s hard to argue that Americans can’t start similar businesses. Those business owners almost certainly didn’t all cross the border with a trust fund at their disposal.

One reason behind this “culture” could be the way entrepreneurship is praised in the US. We hold a very specific type of entrepreneur on a pedestal. Think about Steve Jobs, Bill Gates, Jeff Bezos, Mark Zuckerberg, Peter Thiel etc. some of the most lauded US businessmen today. One aspect of their career routes is revealing: the part about dropping out of college and starting their businesses without a $200,000 college debt on their shoulders. And frankly, the rest of their stories makes them horrible role models for entrepreneurship.

First of all, these guys are geniuses. You and I honestly… are probably not as smart as they are. A braniac making computers in his garage isn’t an ideal example for the average Joe entrepreneur. In the US these days, entrepreneurship is often portrayed as something reserved for an elite, intellectual class. The message seems to be, “Only start a business if you’ve really got it figured out.” The entrepreneur drops out of college not because he’s dumb, but rather because he’s too smart and visionary for school. We need a lot more examples of regular people with average talents – or even below-average talents – starting a business.

Despite the common portrayal, entrepreneurship is not about being smarter than everyone else; it’s about creating something for yourself.

The average Mexican taco joint isn’t flipping the culinary world on its head; it’s simply carving out its piece of the pie with its workers’ skills. Furthermore, as Americans, we seem to have an idea that a business plan is only good if it will make one wealthy, preferably next year at the latest. If the idea can’t make a million or even a hundred thousand bucks in a year, it isn’t worth doing. People from many other countries see it differently. The guy working a gyro cart on the corner is probably lucky to clear a lower-middle class lifestyle, but he starts his business knowing that ahead of time and if he’s lucky and works meticulously he’ll have a good life. Some of the best food we ate during our last Manhattan visit was from street vendors selling shoarmas as good as in Beirut. My question remains, “Why only in New York?”

Somewhere during the past 390 years, there was a change in America’s entrepreneurial spirit. Entrepreneurship is no longer a process of creating a job for oneself; rather, it’s almost exclusively seen as the exploitation of some genius idea or utilizing superior intelligence outside an academic context. That’s really not what it’s all about. And this change isn’t just an economic tragedy, but more so a cultural one. Consider this, right now, there are thousands upon thousands of students graduating with light weight college degrees in art, music, and English. They’re preserving traditions dating back centuries. In contrast, how many Americans are learning to make an excellent baguette, New York bagel or a proper Philly cheesesteak? In my opinion, this culinary art form is more important than those classical majors.

Call me uncultured if you will, but if you do then please remember that I grew up inside the Halls and Walls of Culture in Western Europe, but these days I’m much more interested in having an authentic cheesesteak on Centre Street, than yet another art gallery or wine boutique that has proven to be unsustainable over time. There’s a lot on the line here. We’re losing something intrinsic to America, and I’m afraid that when it’s gone, it will be impossible to get back.

Footnote: The idea for this story was initially based on missing my French breakfast favorite, which in turn was fired up by this picture Amelia Islanders Bob and Caroline Tunkel entered into the first Photo Contest The Travel Agency organized on behalf of their “Discover the World” Travel Show this coming Friday at the Ritz Carlton, Amelia Island. When I laid eyes on the picture my glands involuntarily started the process that causes salivation and melancholic memories, followed by a remote but always present irritation that we should not let government rules, regulations, local ordinances or federal laws take away, what once built the essence of America. Entrepreneurship first and foremost embraces the art and perseverance of creating something for ourselves.