What Happened to the Economy ?

We’re in a period of de-leveraging, but Mr. Market doesn’t care what we think. He has plans of his own! That's why stock market investors are ahead for the year. For now. 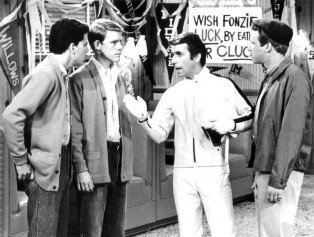 Uncertainty is not a bad thing. It’s what creates opportunities in the market.

Are happy days here again? Think more along the lines of Milton Ager and Jack Yellen, instead of Potsie and Fonzie. Less than three weeks ago, it seemed like the U.S. economy was falling off a cliff. Firms like the Economic Cycle Research Institute were saying a new recession was on its way and there’s nothing the government could do to stop it, according to MarketWatch. The stock market was sensing economic weakness, too, as it slumped to its lowest level in a year on October 3.

But, now, just two weeks later, the S&P 500 stock index is up a whopping 11 percent since October 3 and trading at the top end of a range that it’s been stuck in for more than two months, according to Bloomberg.

Has the economy suddenly turned the corner?

Well, economic reports in the last couple weeks have come in better than expected. According to The Wall Street Journal, “Auto sales rebounded to their highest level since April. Chain-store sales posted year-on-year growth of 5.5 percent. The economy added 103,000 jobs, and manufacturing sentiment improved a bit.” On top of that, the Commerce Department said retail sales rose 1.1 percent in September — above the 0.8 percent expected by economists surveyed by MarketWatch.

While the recent positive economic data is encouraging, it would be premature to ring the metaphorical bell for an all-clear signal. As we have seen over the last few days, the European economic crisis continues to ripple across the pond and impact the U.S. market indexes. The economy still has plenty of repairs to make before happy days are here again.