What I learned at the Coach Store in St.Augustine

Recession? What Recession, was my initial reaction to the massive amount of buying people at St.Augustine's Outlet Mall last Saturday. 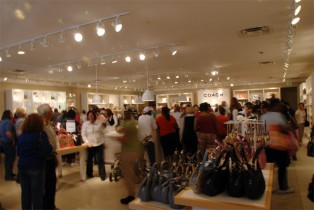 Sales Specials at the Coach Outlet Store in St.Augustine

We were invited to join some friends in Crescent Beach, just south of St.Augustine, for a double Birthday Celebration party last weekend. While packing for the short trip I was informed by my wife that a quick stop at the Coach Store in the St.Augustine outlet mall, had to be built into time and arrival schedule. There was a 30% off sale going on for the President’s Day weekend, that could not be missed. Coming off I-95 at the outlet mall exit, I sensed that I was going to witness a mind altering economic experience. The exit was bumper-to-bumper traffic which crawled at a speed of 5 miles per hour towards the entrance off the Outlet Mall. The immense parking lots were filled to capacity as motorists patiently were looking for someone to leave a spot to pull into. I emphasize patiently because it was amazing to witness this amount of courtesy and friendliness on the first sunny and relatively warm day of 2011.

“It must be the weather”, had been my first thought, explaining this massive amount of cars moving into the Outlet Mall. Quickly however I learned that it really was a convergence of recession fatigue and winter fatigue. People are tired of cold and rain – since early December we have been enduring some nasty, cold and rainy weather here in Florida – and people are tired of the recession and are looking for deals to get life back on track. Neither fatigue is very realistic considering our inability to change it, but it is what it is. We can not change the weather, but we can change our attitude towards it and pretty much the same goes for the economy.

And that’s what I caught a glimpse of, last Saturday in the St.Augustine Outlet Mall.
In a feeble attempt to disguise my distaste for shopping in malls, I walked into the Coach store and was confronted by a MOB of mostly women of all ages, race and dress codes. The few men in the store were more of pleasing servitude to their female counterparts, than store decoration. The buzz in the store was loud and full of excitement and the check out lines were counted in time rather than people.
My wife knows I’m good with numbers, so when she came over with a purse that said $399 on the ticket with 40% and another 30% discount over the balance, my answer of $167 and some change, send her on her first excited dash around the store.

I asked the woman at the door who handed out 30% discount coupons, how long this “madness” had been going on, expecting something like: “oh the last 30 minutes or so.”
“We had to move people out of the store at closing time last night” she said, “and this will continue until the sale ends on Monday.”

Now as far as my knowledge goes, Coach is not the most expensive line of purses, pocket books, wallets and sunglasses, but by no means the cheapest either. Looking around at the shopping women, I noticed that most of them already had a Coach Pocket book on their arm or shoulder. In the check out line I noticed many of them with Coach wallets in their hands and then I noticed that several of them had actually cash in their hand to pay for the purchases. Now in all honesty that was a sight I haven’t seen in a long time.

Leaving my wife to her rounds of the store I went outside to sit on a bench and started crunching some numbers. That’s what I do when I see large crowds behave in a manner that belies generally published behavior.
The general wisdom is that we are crawling at a snails pace out of the claws of an enduring recession; that people have become frugal and targeted with their spending; and that the general attitude has not even reached the level of cautious optimism yet.
So what is wrong with the picture that 8 out of 10 women walking out of the Coach store have made a new purchase and that 7 out of those 8 already are wearing a Coach product. Oh I didn’t make up these numbers. I was actually counting people for the next hour going in and out of the store.

Other interesting observations; roughly 50% of the women were African American, about 30% caucasian and a good 20% Asian and Asian American.
At one point an African American woman sat down next to me on the bench and we started a conversation about the weather and the Coach store’s attraction on this Saturday and I learned something that should have been obvious in hindsight. She told me that she worked as a supervisor in the school system in Duval County and in an open and frank conversation I learned that a growing number of African American were working in government with a steady paycheck getting ready to claim their share of American wealth. When she lit up a cigarette, she told me to look around and notice how many African American woman where smoking while window shopping the mall. I counted 10 within a couple of minutes and realized that I had caught a glimpse of an important shift in economics and social strata.
As confusion was fighting with enlightenment in my head, I came to the conclusion that not only all economics are local, but that within social strata certain movements cannot be stopped just because economic circumstances dictate prudent and frugal behavior.

African Americans are catching up in luxury and brandname status while benefitting from bargain pricing. You can only witness this if you get a change to step away from general statistics and observe the real action in the streets and malls. My wife came out of the store with only a small purse and a pair of sunglasses (both at bargain prices), mainly because she already has a number of Coach pocket books and purses for various occasions. This “economic uprising” reflects more a consumer point on the bell curve for brandname adoption than a true economic revival.

A brandname purse that used to sell at $399 to more affluent portions of the population are now available at $167 of an already diluted currency. The only question remains if we can keep up with the production of new and improved.
To explain this: When a purse that sells at Christmas time for $399 and in February for $167, get priced down to $49 for inventory clearance by May’s Mother’s Day, will we have another $399 model exclusively attractive to start a new life cycle.

What I re-learned on this sunny Saturday in February is, that beyond the mere respect for numbers, humans have a need to take action beyond what common wisdom dictates. Consumer Economics is not a science, it cannot be quantified as a rule. Many of these shoppers at the St.Augustine Outlet Mall saw a chance to purchase the “power” of a brandname product at a bargain price.
The desire to display brandname acceptance, was bigger than the caution of economic frugality. They considered their purchase a frugal investment in a brandname product that previously, at the original price, could have meant a week without decent food on the table. It actually reminded me of the question I often heard during my years in the Caribbean: “Is it expensive to live down there?” The answer was: “It depends on what you want to spend your money on. Alcohol and Tobacco is extremely cheap. So is chicken and rice. A bottle of Rum can be purchased for $3. But if you want a carton of Tropicana Orange Juice with it, you’re looking at almost $10. A 30 gallon tank full of gas is about $170, which would pay for a Coach Purse at the St.Augustine Outlet Mall.

Spending in line with income is an easy decision when you take the Credit Card out of the equation; which is why I was happy to see several people pay with cash for their purchases last Saturday.