What the Bachelorette and GeoThermal Energy Have in Common

Iceland's Capital Reykjavik gets all its hot water and building heat from geothermal energy technology. 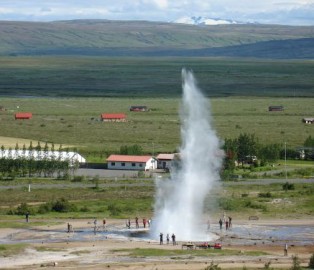 Thermal Heat from inside the earth

Well, Iceland for one. As I walked into the bedroom last night my wife was watching her summertime favorite Monday Night program “The Bachelorette” and as I glanced at the TV screen I saw a young woman and a bunch of guys frolicking in one of Iceland’s famed geyser ponds. I also noticed that the segment was produced several months ago as the surrounding areas were still patched with snow. It took me back to  time a long time ago I did exactly the same as these people.

For a small island in the Northern Atlantic with a population of 317,000 people, Iceland has been catching a lot of press lately. First there was the boom, then there was the bust, then there was a little known volcano that shut down most of the European air traffic for a multi billion dollar loss and now it is hot again as a tourism destination. The “steamy” water scenes from the Bachelorette undoubtedly will add to its charm and attraction. I experienced Iceland in a different time when the Cold War blew over the island and no one had no clue what to do with that jewel in the sea, because Iceland had a couple of good answers to our voracious fossil fuel energy needs and was ideally situated to keep both superpowers in check. And Iceland has hot water coming naturally out of the ground.

No joke, all the hot water in Reykjavik comes directly from geothermal sources

Southeast of the capital of Reykjavik, the town of Hveragerdi serves as a geothermal farming center for the capital. When you drive around town you see puffs of steam coming out of the ground all over the place. Greenhouses Galore, often surrounded by steaming cracks in the ground. Because of its extreme location, Iceland is actually able to produce much in the way of tropical fruits and vegetables with the help of geothermal steam.

Guess what? Iceland is Europe’s largest producer of bananas, that come from in or around Hveragerdi. Except for the geothermal farms everywhere, Hveragerdi looked a lot like a small quiet town that would have fit right in place in suburban America.
With its seemingly unlimited geothermal energy combined with ample hydro-electric power from glacial rivers, Iceland is looking to become the first country in the world to do away with fossil fuels entirely. Now if only we all lived on a transcontinental plate boundary, what a blast we would have.

So what’s so great about geothermal energy and why the renewed attention?

Because we’re all looking for different ways to fill our energy needs directly from Mother Earth and because Nevada Senator Harry Reid scored a big win for his homestate last week, as $90 million plus from Obama’s economic recovery fund went to Geothermal  Energy generation in Northern Nevada, a geographical area much the same as Iceland.

Senator Harry Reid made the headlines calling “Northern Nevada the Saudi Arabia of geothermal energy.” Maybe a tad over the top as Senator Reid went on to say, “I am glad to see economic recovery funding being used to put Nevadans to work on a project that will help us achieve energy independence”, as geothermal could produce about 10% of what we supposedly need here in the States.

Unlike other alternative resources, such as wind and solar, geothermal can draw energy twenty-four hours a day seven days a week; and unlike other natural resources (such as power plants that burn coal, natural gas, or oil), no fuel is needed to power a geothermal plant. Essentially, geothermal plants mine the heat from both the hot rock and flowing water below ground. The heat in turn produces steam that drives turbines at the ground level, producing electricity.

Now, does it come as a surprise to know that the United States is pretty much ahead of the rest of the world, being the largest producer of geothermal energy? It did to me. And, according to Nafi Toksöz, a geophysicist at MIT, the combined energy of geothermal plants in California, Hawaii, Utah and Nevada is comparable to all the solar and wind power produced throughout the U.S.

Does it come as a surprise that an MIT study 3 years ago called Geothermal Energy good for at least 10% of the Nation’s energy needs? I didn’t know, but sometimes I think there is a message out there that we humans simply cannot grasp when it comes to heat and energy and fossil fuel versus so many other sources that seem to be available at pretty much the same economic scale, yet we keep going for the ones that carry the highest disaster risk. 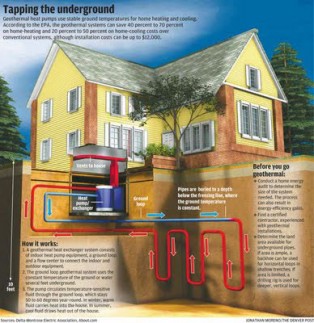 The Use of GeoThermal Heat is ancient.

We all use heat pumps as heater/air conditioning units here in the South, at least the smart ones among us. Some are already experimenting with individual geothermal house units. Geothermal power is one of the great untapped resources in many locations around the Earth. Physics teaches that much of the universe’s energy is in the form of heat and that humans have typically failed to make good use of the heat they have. Even in energy conversion of other forms, the reason for the loss of efficiency is heat generated from the conversion that is never used for any practical purpose.

Geothermal drilling seeks to change this. By drilling holes deep into the Earth’s crust, especially in certain regions of the world, such as the Pacific Rim, there is the possibility of accessing vast stores of energy. Geothermal well drilling can be a major process as these wells may go down three miles (5 km) or more, depending on where in the world they are located. But as we have learned the hard way with Deep Horizon, drilling deep for oil is not a necessarily safe answer.

So, while there is heat available in all parts of the world, some places would have to dig much deeper than this, making getting geothermal energy difficult. Thus, the costs for geothermal drilling in those areas would likely exceed the benefits. 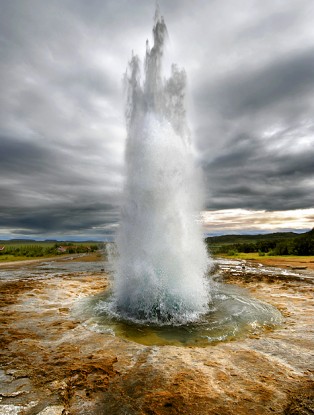 Mother Earth has some spectacular moments

Once the well has been drilled, there is a virtually endless supply of energy. Further benefiting geothermal drilling operations is the fact heat rises, meaning there is very little in the way of mechanization needed to bring the energy to the surface, once the route has been created. However, the process does not simply end with the geothermal drilling. It must still be converted into useful energy.

In some cases, the energy conversion is not needed. This is most commonly seen when the energy is used for space heating. However, this is an entirely different situation altogether from commercial geothermal drilling. In this case, the geothermal well does not need to go nearly as deep. Just a few feet below the ground, the Earth stays nearly a constant temperature of between 50 and 60 degrees Fahrenheit (10 to 15.5 degrees Celsius) in nearly all locations. Therefore, the air only needs to be heated approximately 10 more degrees to make it comfortable.
If conversion is needed, this is usually accomplished by producing steam. Some wells already do this naturally, further simplifying the process. In other cases, steam is created using the heat available. That steam then rotates turbines, which produce the electricity.

Once drilled, geothermal wells offer a very clean source of energy void of pollutants or greenhouse gasses.
Geothermal drilling is not always “void of pollutants”. Many geothermal areas produce large amounts of salt, minerals and gases along with the hot water. This creates a disposal situation.
The salts and minerals in the drilling process can clog up turbines and pipes, creating expensive cleanup operations and corrosion that shorten the life and add cost to the energy production.

How about this as a concept for the future: isn’t it time to approach energy from a global point of view. Without energy there is no prosperity. Why not the concept of a United Nations for Global Energy?