What’s the Word on Fireworks in Florida?

You can buy fireworks other than sparklers, but it is illegal to do so in Fernandina. Stores and roadside stands who sell these fireworks are exploiting a loophole in the law. 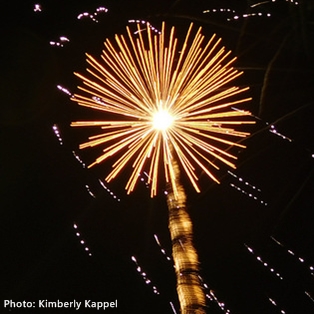 As the July 4th holiday approaches many folks have been expressing concern about the annual ritual of backyard (non-permitted) fireworks displays. Suffice to say, if you’re planning a holiday fireworks show, you might want to brush up on Florida’s current fireworks laws. The bottom line is that just because you see it in a store or at a roadside stand doesn’t mean that it is legal to purchase, possess or use!

What Fireworks Are Legal in Florida?
The only fireworks legal for use by consumers who don’t possess a special permit are those that fall into the category known as “sparklers.” This includes items more commonly known as sparklers, fountains, snakes and glow worms. If you’re not sure whether a particular firework is approved for consumer use, the Florida State Fire Marshall publishes a full list of legal sparklers each year.

Can I Buy Other Fireworks?
Well, you can buy other fireworks, but it is illegal to do so. Stores and roadside stands who sell these fireworks are exploiting a loophole that allows them to sell the fireworks for legal, approved uses. When you buy them for your backyard fireworks show, you are breaking the law. And yes, even Roman Candles are illegal in Florida.

What If I Sign a Waiver?
If you try to purchase fireworks (other than sparklers), many stores and roadside stands will often ask you to sign a waiver form. If you read this form carefully, you will notice that you’re stating that you intend to use the fireworks for an approved purchase, such as use on your farm or at your fish hatchery to scare off birds or animals. This lets the store off the hook. If you’re lying to them, that’s your problem, not theirs, in the eyes of the law. The wavier protects the store, not you.

But Everyone Else Is Doing It!
It’s true that lots of people set off illegal fireworks in Florida. Lots of people also speed, jaywalk and break any number of other laws. You will be gambling that you won’t be the person who gets caught.

What Can Happen If I Set Off Fireworks Illegally?
Most importantly, you may be seriously injured or you may injure an innocent bystander or child. In Florida, possession or use of illegal fireworks is classified as a misdemeanor. If you violate this law, you can be arrested. If you are found guilty you can be fined up to $1,000 and sentenced to up to a year in prison.

Because of the increasing number of complaints, the potential for serious injury, and the time and cost of cleaning up, the Fernandina Beach Police Department has been tasked with addressing this problem. Please do everyone a favor and limit your fireworks viewing to one of the permitted displays already being planned for the area.

What about Filling the Loophole?
In the next few months the City will consider how best to address this issue, either by City Ordinance or through a state legislative initiative, effectively eliminating the roadside sale of illegal fireworks loophole.