When It Rains, It Pours

When it rains it pours and last week was a tropical storm at my house! 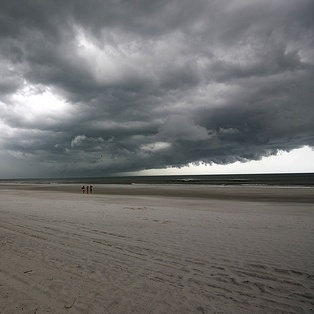 Did you ever have one of those weeks where everything seems to go wrong? Have you heard the old idiom, ‚Äúwhen it rains, it pours‚Äù or the nursery rhyme, ‚ÄúIt‚Äôs Raining, It‚Äôs Pouring‚Äù? Like a summer storm on the island, at my house it is definitely pouring!

My husband had to go away on a business trip and I took him to the airport on Sunday. Everything was fine when he left. When I got home from the airport, my brother told me that he did not think that the air-conditioner was blowing cold air. We turned it off and tried to figure it out and ended up calling a friend that is an air-conditioner repairman to find out what was wrong. It seems that the air compressor picked just that day to lock up. Of course, this is the middle of August in Florida and it was 93 degrees inside my house. Unfortunately, this was just the beginning of my week.

Later, the same day my brother and I were talking in the kitchen and the laundry room light went out. We thought it was the light bulb, but the outdoor light was out too and he realized that the circuit breaker had popped. I had gone into my bedroom earlier and put a fan in the window and turned my ceiling fan on high to cool off the room. Well, the circuit breaker did what it was supposed to because my ceiling fan spun itself down out of the ceiling and the wires touched and blew out everything.

Tuesday night I got home from a meeting and discovered that my wallet was missing. I dug through my purse and tried to figure out where it could be. I worried all night and most of the next day. I canceled my bankcard (luckily the only card in that particular wallet) and was trying to figure out what I needed to do about my identification. When I left work, I decided just on chance to look at the far side of my car, and there it was. My purse must have fallen over. Needless to say, I was very relieved. I will not have a new bankcard for 7-10 days though.

Last night my son was watching television in the living room and all of a sudden the picture started blanking out like it does sometimes in a storm. It continued to get worse and we realized that it was the television, not the satellite. The smell of burnt electronics was strong and we checked to see if it was on fire. It didn‚Äôt seem to be burning, but I think it has seen its last episode of Big Brother.

I have a list of things that I want to get accomplished in the next few months, but a new air-conditioner compressor or a new television were not on that list. At the end of the week, despite everyone‚Äôs best efforts, the air-conditioner is still broken, the ceiling fan has to be re-wired, and the television does not work. I cannot wait until my husband comes home so we can weather this rain together.