When One Door Closes, Another One Opens

It was sunny until the rain threatened and the wind turned cool, but the musicians were magnificent. Great testrun for the Festival in September 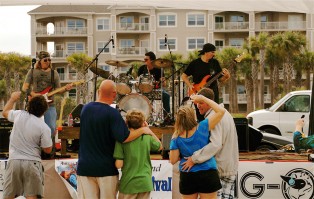 When the sad news came in that Pinetop Perkins had passed away a couple of weeks ago, the Amelia Island Blues Fest committee knew, that it had gambled and lost on the 97 year old Mississippi Blues Giant to be a headliner in the September Festival. Obviously the thought of that possibly happening had occurred on more than one occasion, yet the motto was “hope will keep us alive”.

And then when nature took its inevitable course and took Pinetop away from us, it opened another door when on the same day we were contacted by Michael Oberg, offering for his 16 year old son Conrad, to play a tribute to Pinetop during the Festival. Now anyone who is not familiar with the name Conrad Oberg should go to youTube and type in his name. There are tons of amazing videos of this kid who plays sensational guitar and piano and….he had in recent years often sat in with Pinetop Perkins during his live shows. Fast footwork by committee president Jeff Malone made it possible for Conrad to show up at last week’s Taste of the Blues on Main Beach and give us a taste of his rapidly rising star.

We video taped some of his renditions, and I was particularly happy when he played my friend Joe Bonamassa‘s “Blues Deluxe” from his third album. The story behind this song selection came from a lunch discussion I had with Joe on the sunny island of St.Martin, when we went over the potential tracklist of that album and I mentioned that I would love to hear him play the old Rod Stewart/Jeff Beck song Blues Deluxe. Joe went further than that, he actually named the album after the track and I am the proud owner of some signed unedited studio copies. Joe of course is now of course recognized as a Blues superstar and frankly I see the same talents in this 16 year old Conrad Oberg.

The sky was sunny, the air still a little cool and the mood was upbeat. The Blues Festival Committee Members considered the Taste of the Blues a test of sorts for what the Big Festival on September 16 and 17 will have in store for the organization. An early equipment malfunction was quickly corrected as the crowds spread out their lounge chairs and towels in the grass at Wolf’s Park on Main Beach and they were not disappointed. “Evolution” started out with acoustic blues renditions, quickly followed by Wisconsin native master guitarist Dan Voll and the Beech Street Blues Band. At 4 pm local super talent Julia Nikki Savage took the event to a magnificent jazz blues level, leading in for Chris Kellam and Blistur’s blues guitar fireworks.

After Blistur, the stage was taken by Conrad Oberg, who has been receiving national accolades since his 2009 performance at the 40th Anniversary of Woodstock.
The evening closed up with always blues-soul and R&B steady Karl Davis and Friends, who introduced us this time to Josh Miller from Cocoa Beach, whose blues renditions not only impressed but were also hilariously entertaining. By the time 8:30 pm came around, the committee shut down the lights in honor of the annual Global Earth Hour and breakdown of the event set up was done in the dark

Even though a couple of rain drops in the late afternoon unfortunately cleaned out a large part of the audience and it quickly turned windy and unseasonally cool in the early evening hours, the organizers learned a lot, which can only be considered useful and helpful in preparation for the big event on September 16 and 17, 2011.

Tickets for the main event are now available on the Blues Festival Website. One Day Passes are $15 ($20 at the door); Two day Passes are $25 ($30 at the door) and VIP Passes, which include VIP seating and barservice, a T-shirt, and limited backstage access, are $100 (limited). You can also get another taste (and tickets) next week Thursday evening April 14 at the monthly Blues Jam upstairs at Café Karibo.