Who is Guarding Fort USA ?

Take for instance the space shuttle, has any astronaut ever called back to Houston questioning who was suppose to fill the tank with fuel before they blasted off into space? 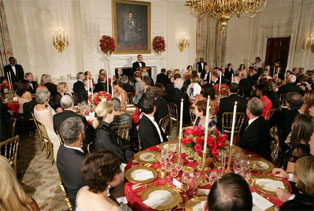 State Dinner at the Whitehouse

You know there are¬†some things you just accept as being jammed up and jelly tight with no room for even the slightest bit of error.¬† Take for instance the space shuttle, has any astronaut ever called back to Houston questioning who was supposed to fill the tank with fuel before they blasted off into space?¬† Or how about our military, ever heard of them being called into action to protect our great country to find out all the troops took the day off or just simply were not in the mood right then to do their job?

The answer of course¬†is no, or least you hope the answer is always no. There are just some things that have a code that never gets broken no matter what the case is.¬† This was also true for agencies like the Secret Service in Washington; that was until last week‚Äôs debacle at the state dinner held at the White House.¬† For those of you that have been underwater or living in a cave the past several days, here‚Äôs the scoop.¬†¬†During a dinner hosted at the White House an uninvited couple made their way through multiple security check points beginning with the transportation arrangements all the way to the metal detectors, passing each and every station with ease.¬† Agents with the Secret Service put in charge of keeping the President of the United States safe and secure, were conned or too lazy to question why this couple that was not on the list, had to be admitted. Search Amelia¬† reported on this last Friday.

This was a formal event with a certified guest list held at the home of the President of the United States. The couple walked in, making their names aware to the announcer, but in fact they were not on the list nor should they have been, and proceeded to hang with the president and his guests for the evening.¬† They took advantage of photo opportunities, mingled with television stars, posed with a group of Marines and even hugged the vice president, this was all before they were personally escorted to the White House blue room where they shook the hand of “the leader of the free world”.¬† This was a busy night for two people¬†who did not receive an invitation, had no business showing up, didn‚Äôt hold a gun to anyone‚Äôs head,¬†but were ushered in by each agent manning the security check points with little to no questions as to why their names were not on the guest list.

Now think about this for minute, this event was not held in some remote spot that was new ground to those charged with security.¬† Additional agents weren‚Äôt to blame for being unfamiliar with the protocols of an affair such as this or any other strange or uncommon reason for this to have happened.¬† No, this all took place in the home where the president sleeps, guarded by people who sign up for the duty to make sure no mishaps occur. A place supposedly so secure that dignitaries and kings have modeled their own security detail after it.¬†Now to have two people simply walk up,¬†get in line and make it to the¬†President, is unheard of.¬† I know things happen and since we‚Äôre all human, mistakes will find their way into places that have little to no tolerance, but this?

I have pondered this issue for days trying to find some reason, some justification for this breach of security and blatant shun of duties, but have yet to come up with anything.¬† Is this it?¬† Is this what we as Americans can begin to look forward to?¬† Is this the new norm?¬† Has the bar been lowered so low that occurrences such as this take place even if it is only once?¬† Was our publisher right when he blamed the Pretty Face Syndrome? Are we still suffering from the Mata Hari complex? I hope for the sake of our country and its citizens that better solutions will be found.¬† Let‚Äôs hope this one incident is a stark reminder that those charged with the responsibilities to keep us and our leaders safe are both qualified and with committed mental attitudes to do their job right at all times, without fail.