Even though long ago Airline food was superb, science has now found why it impossible for food to taste good on a plane. 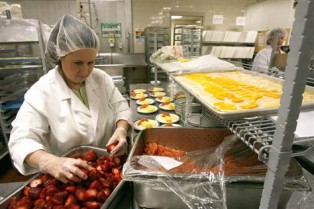 I’m a big believer in science, even though I have some nagging doubts about the latest scientific explanation why airplane food (these days) tastes so bad. True, the explanation of how foods need to be spiced up to taste like anything at all and how taste buds suffer from flavor arrest the higher up we are, sounds logical, but does not explain why a pan fried steak with sauteed mushrooms and Pommes Parisienne on a transatlantic Sabena flight from Brussels to New York in 1972 tasted like heaven at 36,000 feet.

Some of us may remember flying in the sixties and seventies, before deregulation, when airlines like Sabena, Singapore Airlines, Garuda and Swissair served full meals with great tasting fresh food. The rhythm of a flight consisted of a snack after take off, a full meal in midair and lunch or breakfast, depending which way your travel went. I remember a Christmas Eve flight from Amsterdam to Singapore on Singapore Airlines in 1976 with stops in Rome, Bahrain and Bangkok, which at each take off was followed by those cities native cuisine dinner, lunch and breakfast, a true Tour de Gourmet that lasted 26 hours.

But deregulation came and flavorful food went first to the front of the plane and from there probably out of the window.
Today science (or maybe pseudo science) wants us to believe that the moment we step aboard a “modern” airliner, our taste buds loose all sensitivity.
It starts with the cabin atmosphere drying out our nose and as the plane climbs higher into the air, it numbs up to 1/3 of our tastebuds, science claims. But once the airliner reaches cruising altitude somewhere at 35,000 ft or higher, the artificial humidity inside the fuselage to reduce corrosion, wreaks havoc with our tastebuds as cotton mouth sets in.

Modern food safety standards require all meals to be cooked first on the ground and during that process airlines add a lot of salt, spices and sweeteners to their foods to try to offset the taste numbing experience that reportedly comes with altitude. After cooking, the portions are blast-chilled and refrigerated until they can be stacked on carts and loaded on planes. Another modern safety rules prohibits open-flame grills and ovens on commercial aircraft, so attendants must contend with convection ovens that blow hot, dry air over the food.

Experts these days agree that getting any food to taste good on a plane is an elusive goal, because the  packaging, freezing, drying and storage are hard on flavor. ‘Ice cream is about the only thing I can think of that tastes good on a plane,’ says Marion Nestle, a professor of nutrition, food studies and public health at New York University. I see a Cold Stone Creamery franchise in the friendly skies in our future, but I am still wondering why that steak at 35,000 feet on that Sabena flight so long ago, was one of the best steaks I ever had. Must have been the ambiance of a jetliner fuselage, being surrounded by strangers enroute to an exciting destination. Oh the mind, it’s such a powerful thing.