Why Am I Doing This?

My 94 year old neighbor Miss Cody gets a ride around town and the island whenever she wants. 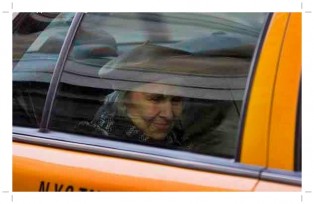 A last ride around the city

I have been writing for the better part of  40 years and in the past fifteen, most of my writing involved deadlines. So about 6 months ago my inner rebel became agitated with a constantly increasing workload, topped off with deadlines that were slowly strangling my creativity resulting in bouts of performance anxiety.

Consequently I have decided to henceforth studiously avoid hard deadlines, since I can’t seem to wrestle myself loose from the joy of being involved in many different areas of life. Now please don’t get me wrong: I love writing and I love’d taking this little website that was meant as a little tribute to the island to a previous readership that toppled 2 million visitors a months in its heyday.

I loved and love my regular correspondence and interactions with so many dear readers from around the globe. Daily I answer emails about my take on Greece being in charge of the European Union for the next year, what’s happening in Buenos Aires where they are starting to pay the price again of 70 years of ruling by the Peronistas and how Washington is rapidly completing its agenda to turn this country socialist. The signs were on the wall years ago when I started writing and they are just becoming a bit clearer year after year. “Que sera, sera, whatever will be, will be “;  Doris Day sang it in 1956 I believe. I took me 50 years to learn that this is different than what we mean today with “it is what it is”.

So over the holidays I came to the conclusion that my desired lifestyle scenario to dedicate as much of the rest of my life as possible to my family and searching for passions, playing music, travel and reading,…..serious deadlines could no longer be in the picture.

And then…. I read this story about a New York cabby, sent to me by a friend in England, with whom I have an ongoing online debate/discussion about the loss of civility, friendliness, courtesies, respect and compassion, and now I know…….. I Can’t Quit writing and sharing the human endeavor, the shortcomings and the victories. It’s where humanity is born….

A NYC Taxi driver wrote:
I arrived at the address and honked the horn. After waiting a few minutes I honked again. Since this was going to be the last ride of my shift I thought about just driving away, but instead I put the car in park and walked up to the door and knocked..
‘Just a minute’, answered a frail, elderly voice. I could hear something being dragged across the floor.
After a long pause, the door opened. A small woman in her 90’s stood before me. She was wearing a print dress and a pillbox hat with a veil pinned on it, like somebody out of a 1940’s movie. By her side was a small nylon suitcase. The apartment looked as if no one had lived in it for years. All the furniture was covered with sheets.
There were no clocks on the walls, no knickknacks or utensils on the counters. In the corner was a cardboard box filled with photos and glassware.
‘Would you carry my bag out to the car?’ she said. I took the suitcase to the cab, then returned to assist the woman. She took my arm and we walked slowly toward the curb.
She kept thanking me for my kindness. ‘It’s nothing’, I told her.. ‘I just try to treat my passengers the way I would want my mother to be treated.’
‘Oh, you’re such a good boy, she said. When we got in the cab, she gave me an address and then asked, ‘Could you drive through downtown?’
‘It’s not the shortest way,’ I answered quickly..
‘Oh, I don’t mind,’ she said. ‘I’m in no hurry. I’m on my way to a hospice.
I looked in the rear-view mirror. Her eyes were glistening. ‘I don’t have any family left,’ she continued in a soft voice. ‘The doctor says I don’t have very long.’

I quietly reached over and shut off the meter.
‘What route would you like me to take?’ I asked.
For the next two hours, we drove through the city. She showed me the building where she had once worked as an elevator operator. We drove through the neighborhood where she and her husband had lived when they were newlyweds. She had me pull up in front of a furniture warehouse that had once been a ballroom where she had gone dancing as a girl.
Sometimes she’d ask me to slow in front of a particular building or corner and would sit staring into the darkness, saying nothing.

As the first hint of sun was creasing the horizon, she suddenly said: ‘I’m tired. Let’s go now’.
We drove in silence to the address she had given me. It was a low building, like a small convalescent home, with a driveway that passed under a portico.
Two orderlies came out to the cab as soon as we pulled up. They were solicitous and intent, watching her every move. They must have been expecting her.
I opened the trunk and took the small suitcase to the door. The woman was already seated in a wheelchair.

‘How much do I owe you?’ She asked, reaching into her purse.
‘Nothing,’ I said
‘You have to make a living,’ she answered.
‘There are other passengers,’ I responded.
Almost without thinking, I bent and gave her a hug. She held onto me tightly.
‘You gave an old woman a little moment of joy,’ she said. ‘Thank you.’
I squeezed her hand, and then walked into the dim morning light.. Behind me, a door shut. It was the sound of the closing of a life..

I didn’t pick up any more passengers that shift. I drove aimlessly lost in thought. For the rest of that day, I could hardly talk. What if that woman had gotten an angry driver, or one who was impatient to end his shift? What if I had refused to take the run, or had honked once, then driven away?
On a quick review, I don’t think that I have done anything more important in my life.
We’re conditioned to think that our lives revolve around great moments.
But great moments often catch us unaware-beautifully wrapped in what others may consider a small one.

Stories like these hit me square in the chest every time I think we are losing our grip on life’s purpose. They show that not all is lost; that not all is self serving greed. This is just one story of the handful or more I get every day in my inbox, that can be shared without feeling like deadlines and commitments, but as healing contributions to our journey.

SearchAmelia may be less of a news website with confrontational perspectives from here on, but it will share stories and show pictures that confirm the everyday uniqueness of the human experience, whether humorous, opinioned or sad.