Why is Capitalism So Misunderstood?

Jewish scholar Hillel the Elder later put it in terms a child could understand: If you would not want someone to do it to you, then don't do it to someone else. 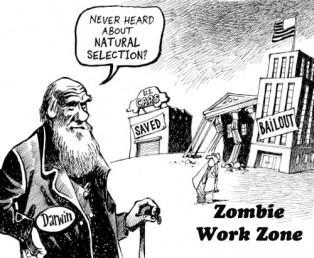 Capitalism is – or should be – the result of free markets, including the insights, work, gambles, and composite luck of millions of people all over the planet.

You want to improve it?
You might just as well try to “improve” the price of Walmart shares or of a pound of potatoes.

Capitalism is not a system that you can take or leave, or take some parts of and leave the others untouched, thereby making it more suited to your needs. It is not created, nor did it evolve.
Capitalism is just what you get when you respect the rules of civilization.

Don’t kill. Don’t steal. Don’t bear false witness. Nothing else much matters, so I haven’t taken the trouble to think about them too much, because Jesus condensed these three rules into two big ones when he gave his Sermon on the Mount: “Love God. Love and respect thy neighbor.” Even though I’m not much of a Jesus promotor, I think he was pretty spot on with this.

The Jewish scholar Hillel the Elder later put it in terms a child could understand: If you would not want someone to do it to you, then don’t do it to someone else. This is obviously transferable into any action or thought you can come up with.
All the rest is detail. You can’t love thy neighbor and steal his stuff. If you follow that rule, capitalism is what you’ve got. There is no way to improve it, in spite of all the claims of those who plan to rob you blind. Those are the zombie parts of the human race, always ready to find wrong in the details, so they set out to correct what otherwise comes natural.

I can bring up a thousand examples of this behavior, but prefer to show you our future as it develops right in front of our eyes.
My example here is Uber, the transportation sharing online company, but could easily be Bitcoin, AirBnB, Roomorama or any online development that innovates the sharing economy as a natural progression of capitalism at work.

So along come some clever people with a good idea – a “ride-sharing” app called Uber.
You find a ride easily. Rider and driver are tracked by Uber’s system to provide a quality and reliability trail on both sides.
And it costs a fraction of a regular cab ride.
If customers don’t like the service, they don’t use it.

Simple, right?
Fair? Honest?
Capitalism doesn’t know or care about that. That’s up to buyers and sellers.

Wait! Can we make this system better? Improve on it?
Yes, say the cronies.

How?
Shut it down!

That’s what vote seeking idiots threaten with across the globe. The latest news from Paris says it is illegal to use the Uber app in the City of Lights. Funny that they chose the month of August to impose this, considering that the city is empty in that month, when everyone leaves for the coast. Furthermore….try to enforce this and you’ll have a revolution on your hands.
But in New York, Mayor Bill de Blasio wants to limit the number of new drivers Uber can take on. What a way to boost employment!

And on the campaign trail, Hillary Clinton, champion of zombies and cronies everywhere, is taking aim at the “sharing economy” – in which innovations such as Uber and Airbnb allow folks to share and redistribute excess capacity without any top-down control. She promises to take a “hard look” at it if elected president. The city of Fernandina Beach wants to come down hard on illegal short term vacation rentals. It will take a whole new enforcement agency with a price tag and in the end the city will admit defeat, because online sharing has taken off and will maximize capacity use.

But for now love thy neighbor – as long as he gives you a campaign contribution.