Why Majority of Americans does not want Ron Paul

Ron Paul holds up a mirror that shows Americans what's wrong with this country, and it works against him. 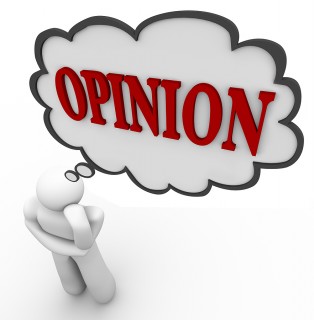 A short while ago I was having lunch at the Amelia River Golf Grill with my dear good friend Shaun, who is a true blooded conservative, but one with a very educated and informed reasoning. Just as many Americans, he seems irritated and annoyed by the lack of political options, yet refuses to accept a political veteran like Ron Paul as an electable entity.

Of course Paul is not your typical run of the mill candidate. He is the only one of the candidates who truly understands economics, the value of smaller government, the values that made this country great, the wider implications of replacing the constitution with the phobophobia of the U.S. Patriot Act. And most importantly in today’s political environment Ron Paul has never in a long career flip flopped on his core values and opinions, just to fit the moment.

As an economist I do understand that Americans fear to embrace his desire to return the US dollar to the gold standard, which Nixon abandoned in 1971, a fact that over the past 40 years singlehandedly facilitated and fueled the enormous debt driven growth of our economy.
Most Americans hope and believe that collectively we can still kick the can of economic demise down the road for another couple of decades and if not, that our military will be powerful enough to acquire what we need.

To sum up Ron Paul’s positions is quite simple:
– anti tax and in favor of smaller government
– less government meddling in lives and businesses
– wants to get rid of Federal Reserve and go back on the gold standard, a philosophical  issue that very few Americans and more importantly media pundits understand, it is the only long term solution to a healthy economy
– against war and un-provoked meddling in world affairs
– as an obstetrician he is mostly pro-life and a strong believer in personal responsibility and has a lifelong track record of delivering babies and helping people without money to pay for it
– he is truly a free market proponent who doesn’t believe in too big to fail companies or any kind of subsidies to them. Paul knows what a business is, and does not sugarcoat their objectives. He wants business to prove their existential rights and merits in the market place where the consumer decides.
– He wants media to be educated in the topics, responsible and accountable …and that of course may very well be his downfall, especially since it might explain why Americans don’t see Ron Paul as a viable entity.
The Media make the King and have so since Kennedy won the 1960 TV debates against Nixon. That’s how America is coin operated these days.

So why not Ron Paul ?

I can’t say it doesn’t baffle me, that voters claim they won’t vote for him because  “He wants to bring the troops back home!” The polled biggest reason why Voters turn away from Ron Paul is when they hear he’s anti-interventionism and that he thinks the way not to get into so many wars is to not have troops stationed in so many different nations. He wants to shrink the military by giving the Pentagon a rational mission. He wants it to focus on defending the U.S. and not worry about our ability to “project our power” around the globe. 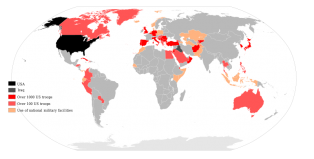 Countries in the world with US Military Basis 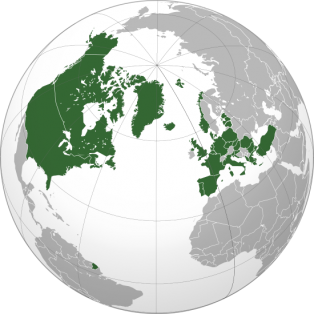 Countries where US contributes to NATO partnership

Say again America, what’s your reason for not voting for Ron Paul?

Do me a favor and name one thing we’ve actually gained from the ability to “project power.” Oh I’m sure you can, even if the reasons are regional and petty, like for example the economic impact of the military here in the Greater Jacksonville Area. Balance whatever you consider the value of that impact against what we’ve paid for it in terms of both human life and its huge role in bankrupting our government over the last 70 years.
Once you’ve done that, you may want to circumvent the media’s opinion and give another thought to Ron Paul. You may still not vote for him, but at least you haven’t fallen for the oldest trick in the political book, which is to leave you full of fear that your ultimate vote may not match your expectation down the road.  A lot of 2008 voters must be wondering right about now, where their vote got them.

In any case I suggested to my friend at lunch that the United States has grown far beyond the capabilities and talents of one person to comprehend or manage in a single pyramid structure. I suggested that Mitt Romney, the squeaky clean, good looking, religious business man candidate and surefire future winner of the Republican primaries, even if for no other reason than lack of other options, should already now team up with Ron Paul as his vice president with the contractual understanding that Paul runs the economy in all its aspects and Romney deals with the rest. Beauty and the Brain what a concept.

Yet I’m going to leave you with another brain teaser. The anti Romney votes in the Republican Party are currently split between the remaining hopefuls.  After Perry, Gingrich, Santorum and Huntsman get out of the race, Paul will probably take their anti Romney votes, because the people in New Hampshire got it clearly when asked to name the candidate with the most moral character. 40 percent chose Paul – more than Perry, Santorum and Gingrich combined.  Interesting.