William Escoffery is a Christian Conservative Candidate. He immigrated to Canada and then the US, and now he wants your vote. 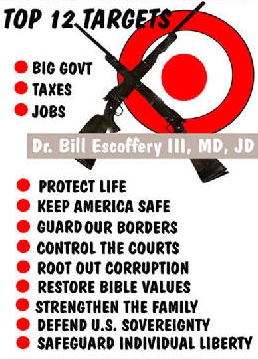 Dr. William Escoffery III was born in Jamaica and immigrated to Canada in 1970. He became a Canadian citizen in 1975 and immigrated to the United States in 1975. He continued his practice of General Medicine and Obstetrics (including home deliveries) in Homestead, Florida for ten years.

He became a US citizen in Indiana in 1993, and has been married three times. He is pro-life, pro-gun and pro-family! His top targets are big government, taxes and jobs. He wants to keep America safe and guard the borders, restore bible values and defend U.S. Sovereignty.

He says, “We have to thwart political correctness and name radical Islam for what it is: the biggest threat to Western civilization since the Crusades.

“In regards to ‘Islam’, the President needs to tell us clearly where HE stands. Is he a radical Muslim sympathizer, obedient to the tenets of the Islamic faith and tradition in which he was educated as a youth in Jakarta, Indonesia; or is he a loyal American Christian who is not afraid to call Islamic terror by its real name – and who will do whatever it takes to protect America?

“To Keep America safe we must not only take the fight to the Islamists in their world, but we must also closely guard our own borders, repel illegal aliens and return the parasites already here back to their own lands.”

As an immigrant, he is 100% in favor of LEGAL immigration. He is a naturalized citizen and came to America with his medical diploma as an asset, not as a free-loading intruder.

There is so much more to be found on his website and this is a great example of why you need to be informed about each of the candidates BEFORE you cast your vote!