After yesterday's Portugal trashing North Korea with a 7-0 win, Spain's 2-0 win over Honduras and Chile's 1-0 win over Switzerland, the final stages of the Group matches in A & B are beginning today. Enough uncertainty in both groups should make the battle grounds interesting today. 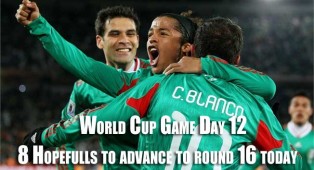 After yesterday’s Portugal trashing North Korea with a 7-0 win, Spain’s 2-0 win over Honduras and Chile’s 1-0 win over the Swiss, the final stages of the Group matches are beginning today.

Almost all groups have seen their surprises but today is the start of the group of Death (not literally of course) games in Group A and B with Mexico taking on Uruguay while France is taking on host South Africa in Group A at 10am EST.

As mentioned earlier in the coverage of the World Cup soccer round-ups, Mexico and Uruguay can take the safe route by playing out a draw and both will advance into the last 16 while France and South Africa must win and hope that either Mexico of Uruguay has enough pride to try to win the group stage else Group A is decided.

France and Host South Africa will both face an early exit.

In Group B Argentina has theoretically already qualified after two previous wins playing Greece who still have a chance to advance if they can beat the Argentineans. An unlikely scenario but we have seen enough upsets in this World Cup 2010 to not discard this possibility. Yet even a win over Argentina will not automatically put Greece in the second round, since Korea in the other game against Nigeria has a slightly better chance to advance if they can beat the Nigerians who technically could even have the best chance to advance but their faith in not only decided by their own victory over South Korea but also rely on Argentina winning their match against Greece with a least a two goal difference.

An additional psychological factor will play into the Group B outcome is that all teams will know the outcome of the Group A games and Argentina, however unlikely may chose not become group winner depending on their next opponent from Group A. Knowing Diego Maradonna’s Argentinean pride they will not chose to lose with a substantial goal difference to determine either playing the Group A number 1 or 2. But we have seen stranger motives in past World Cups however a substantial loss against Greece and a substantial win of North Korea over Nigeria could technically put the three teams equal on 6 points and eliminate Argentina in the process. This virtually guarantees that the Argentines will take the match against Greece very serious.

The most likely outcome of today’s games is that in Group A Mexico and Uruguay will split the points in a draw putting Uruguay in first place and Mexico in second pairing Argentina to the latter in round 16, while Uruguay will meet either the Koreans or Nigeria in their round 16 game.