US and England Advance and rivals Germany will meet the British while Denmark and Japan will fight over the last spot in Group E and Italy, New Zealand, Slovakia and Paraguay all still need to determine who is advancing and in what position in Group F. 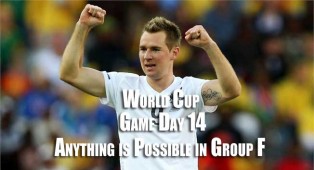 It looks like the USA is turning into a soccer nation after all since their well deserved win and display of backbone against the Algerians who fought desperately to keep their chances alive. The Untied States showed that the game is really not over until the last whistle from the referee sounds scoring in virtually the last chance in overtime through Donovan.

In the other Game in Group C between England and Slovenia, the British did the same by finally showing that they did deserve a place in the next round by edging the group leaders with a 1-0 win.

England will face Germany while the US will meet Ghana who despite losing to Germany (1-0) advanced because the Aussies did not want to go home without one win in their group stage. The other contender for a spot in the last 16 were the Serbs but the Socceroos showed their fighting spirit in trying to do the impossible in scoring enough goals themselves and hoping that Germany would put a serious dent into Ghana’s goal deficit to advance them selves. It didn’t work but secured Ghana’s place in the last 16.

The Netherlands game against the Cameroonian team is only a formality since Holland already advanced to the next round while the Danes and Japan will battle over the last spot in Group E. The outcome of this game can go either way but a draw between the two will only benefit Japan on a better goal difference.

Group F is where everything still needs to be decided including the reigning World Cup Champions Italy who still need to secure their ticket to round 16 against the Slovakians while Paraguay are taking on the “all Whites” from New Zealand.

If we would believe that rankings have any meaning in this World Cup, the outcome in both games would be obvious but no team can just rest on their “credentials”. The New Zealand team kept the Italians on a draw a couple of days ago and can be marked as one of the biggest upsets in the tournament. The All Whites on paper have the tougher task on taking on Paraguay ho only need a draw to advance while a draw for new zealand would do them any good unless the Italians in their game against the Slovakians also only end up in a draw.

Should that happen than the rule books will have to be dusted off since New Zealand would end equally on points, goals, and their match against the Italians also ended equally. A dilemma for the tournament organizers would put a serious dent in this wonderful World Cup tournament since a “lottery” would decide who will draw the shorter end of the stick. A rather embarrassing negative note we hope that will not be required.

As for the two tickets to round 16? Anything is possible in this Group F.