Portugal and Brazil will meet up and there won't be a Language barrier between the two. I hope the referee speaks Portuguese else he will miss out the verbal serious fun of this game, while Spain and Chile will have their "Spanish entertainment". The seriousness of both games will stir emotions on all 4 sides that will border on the rivalry of the past, yet determine the outcome of this World Cup soccer event. 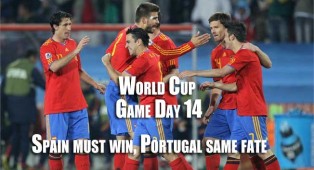 Brazil and Portugal - Spain and Chile rounds of death

Today will be the last games in the Group stages G and H and it promises to be as dramatic and thriller like as  yesterday when Italy got their tickets handed by Slovakia (2-3). Not to advance but to go home. Reigning World Cup Champions met the same fate as their opponents France 4 years ago. Most remarkable about the Azzurri’s exit was there strength has become their weakness. Defense has always been the saving grace for Italy but proved to be the nail in their coffin in South Africa. Having to fish 5 balls out of the net in 6 real attempts on goal throughout the Italian campaign is a statistic well worth noting without doing Slovakia injustice with an excellent played game in which they deservedly put them against the Dutch in the round of 16 in Durban next week Monday.

The Netherlands advanced unblemished with a maximum of 9 points out of three games and what could have turned into a lullaby game between Cameroon and Holland, was actually an open, no holes barred game that Cameroon did not want to lose.

Holland’s superstar returned after a 19 day hamstring injury and uncertainty if he would ever set foot on South African soccer soil. His 18 min. first appearance showed why Arjan Robben is the most sought after striker in the world. The Dutch were doing fine to meet their objectives but when Robben in his typical right wing, left foot style curved the ball from 20 yards out against the inside goal post for Klaas Jan Huntelaar to slot home in an open goal, Robben’s super stardom was once again confirmed earning the Dutch the maximum points in their Group.

Japan was the other team out of Group E that advanced after a 3-1 rout against other qualifying hopeful Denmark. Japan will meet Paraguay who kept the “All Whites” from New Zealand at a goalless draw in Group F, in their round 16. New Zealand, Without losing a game can go home with pride not to having lost a game and being responsible for keeping World Champion Italy out of the round 16.

Group H is a complete different story. Chile and Spain will meet each other in a do or die match. The Chileans are not going to give up their top position and a loss would mean uncertainty about their advancement into the next round while Spain must win to keep their World Champion contender position. A draw between the to would guarantee Chile to advance while Spain would be at the mercy of the other game in Group H between Switzerland and Honduras.

While Honduras only has a theoretical chance of advancing to the next round it is a chance and they are not going to hand the Swiss a walk in the park. The Swiss will have to win this game with a two goal margin to secure their advancement and will do everything in their power to do just that because regardless the outcome between Chile and Spain they would advance to the last 16. A draw may suffice but that would mean that the Swiss are at the mercy that Spain would lose a second time at the finals. A foolhardy approach.

The ingredients in Group H, where any of the teams can still advance into the round of the last 16, will guarantee a front row seat on many coaches across the world and ESPN 3 with picture in picture displaying both games may become the most sought after TV channel today.

Portugal – Brazil and Ivory Coast – North Korea at 10:00am EST