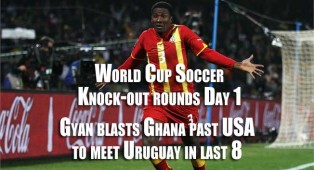 Uruguay and Ghana in last 8, US and S. Korea go home

Uruguay and South Korea where the first two teams to battle over the advancement to the quarter finals in rainy Port Elizabeth and match winner was Luis Suarez for Uruguay. His two brilliant goals downed the South Koreans who had many an opportunity to take the lead but a tactical fast paced Uruguay executed clockwork yet surprising plays that the overly structured Koreans simply could not master.

The Koreans could have taken the lead but the free kick ball from Park Chu-Young
hit the goal post on the wrong side. Barely 3 minutes later an unmarked Suarez slotted home a low cross that should have been intercepted by the Korean goalkeeper to take the lead.

The Koreans played masterful plays but where unable to tear open the Uruguay defense until the 68 min. of the game when a badly cleared header sailed straight to the unmarked Lee Chu-Young who had no problem heading home the equalizer. The Koreans who had been dominant throughout the second part of the match made an lethal mistake by not pressing on their advantage and withdrew into a defensive position. La Celeste (Uruguay) got handed the key to seek their luck in pulling ahead again. The Ajax forward Suarez, who was left almost unmarked when Forlan’s corner kick sailed past everyone, and landed in Suarez’s feet who elegantly sidestepped a Korean defender and blasted homemade from the edge of the box.

Korea had one more chance to equalize but saw their attempt in slow motion edge towards the empty goal after Uruguay goalkeeper  Musiera half stopped the ball to finally being cleared by Lugano.

Uruguay held on to their 2-1 advantage and booked their slot in the quarter finals they last reached in 1970.

The much anticipated match between the United States and Ghana went into overtime but Gyan fired Ghana into the last eight.

Ghana is marching on as the last hopeful for the African continent after emerging victorious against a leaderless United States. The black stars will meet the Uruguayans in johannesburg on July 2nd while being only the third nation to eaver reach the last 8.

The West African stunned the USA in the first 5 min. after Ricardo Clark clumsily and completely unnecessary gave the ball away to Boateng who outran the USA defense and his low shot beat goallie Tim Howard.

The US never found their rhythm in the first half and sorely miss a “motor” and organizer who can direct and captain the individually excellent players.

The US was second best in the first half. They created several chance to pull alongside the Ghanaese but simply failed in a lackluster way to beat the dominant player on the field and goalkeeper Richard Kingson.

The US coach felt that he had to chance the set-up by bringing in midfielder Robbie Feilhaber. This switch almost immediately paid off. A much more aggressive American team came onto the pitch and started pushing Ghana back into their defense. Several almost not to miss chances where created but the American forwards somehow either ran into Kingson or had their shoes wrongly knotted and sorely missed chance after chance.

Finally with the help of a well deserved penalty kick, Dempsey was clattered by Johnathan Mensay inside the box, Donovan’s millimeter correct execution pulled the US equal.

Although several other chances where created none hit the mark. Overtime.

Ghana opened the same way as they did at the start of the game. A clear misunderstanding between the two US defenders who let the high ball bounce in between them into the direction of Tim Howard in stead of clearing it, Ghana’s most dangerous striker Gyan raced between the two defenders to pick-up the bounce and fired home leaving the US goal keeper without a chance.

Although the US tried to find again a rhythm, it became very obvious that an orchestrator was the missing link. As the minutes ticked away so did the energy and creativity in the US attacks.

The USA has a great team of individuals and some organization but it misses a true captain capable of orchestrating and motivating the individuals to become a real team. I’m sure that we will see the United States back in 4 years on the highest showcase platform in soccer but we’ll have to wait and see if a good team can become a great team.