Germany and Argentina move on to the Quarter Finals in Wold Cup Soccer South Africa 2010 leaving England and Mexico empty handed. And what a day it was. 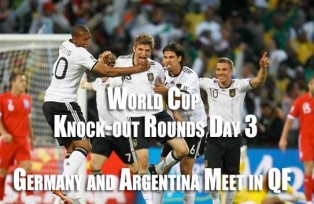 Germany and Argentina move on to the Quarter Finals in Wold Cup Soccer South Africa 2010 leaving England and Mexico empty handed. And what a day it was.

Arch rivals Germany and England put up a display of pure soccer magic that eventually resulted in a 4-1 win for Germany and would suggest that the game was a one sided display. The Germans dominated from the opening whistle and took a very fast 2-0 lead over England. This shook up the fans, the players and brought the entire game to a thriller with chances on both sides.

Joachim Klose (20th min) and Lucas Podolski’s (32nd min) goals gave Germany a fast safety margin and was mostly contributed due to lapse of concentration on the British side in the exact similar fashion as described yesterday being the reason why the USA was ousted. As defenders you cannot let this “flying” ball bounce in high forward passes as it will have deadly consequences in this World Cup. The English defenders did let a high ball from Goal Keeper Neuer bounce and Klose wormed himself between two British defenders to put his foot against the ball before British Goal Keeper David James could reach it.

The opening goal forced England to play the game Germany loves. The young team of the Germans like the high speed breaks that demolished the Australians and Serbia in the opening round. Several high speed breaks lead to extreme dangerous situations in front of the England goallie and it was just a matter of time and in the 32nd min. it was Podolski after being set-up by Mueller that got sufficient time to put the ball right in front of his good foot and slotted home.

Finally the British woke up to the reality of facing a two goal deficit. Their immediate increase of pressure resulted into Lampard, after a short corner, dropping a delightful ball right on the head of Upson who nodded English style the ball into the net. 60 Seconds later Lampard himself was to be the hero for England when his powerful strike hit the underside of the bar and the ball bounced down. Everyone but the referees clearly saw the goal and video slow motion showed that the ball bounced at least 2 feet behind the goal line. This could/should have been a game changer but it was not to be.

In the Second half England had no alternative than to play the German Game. On two occasions within the opening minutes England could have scored but goal keeper Neuer and again the crossbar stood in the way of equalizing. The pressure game England put up left the defense vulnerable to counter attacks and in the 67th min. after a free kick from Lampard hitting the wall and the bounce landed in Mueller’s feet who passed to Steinschweiger in a high speed break outnumbering the British. A delightful pass at exactly the right time put Mueller eye to eye with goallie James. His powered his strike past James to extend the German lead to 3-1. German’s fourth was a carbon copy of the third putting again Mueller into scoring position which he did without fail from the high speed break.

England never gave up but could not avoid their heaviest rivalry defeat against the Germans in Fifa World Cup history.

Diego Maradonna’s Argentina side where simply too strong for the hard working Mexicans although it started out so promising when Carlos Saldico’s long range drive rattled the crossbar. Another lucky escape for the Argentineans just minutes later when Andres Guardado’s fierce shot spun away from the far post. At this point the Argentineans took over the game in a clinical fashion under leadership of superstar Messi who is still haunting his first goal in South Africa. It seems that his role is carved in stone as the “General” orchestrating the chances for his team mates. Breaking the deadlock Messi served Matchwinner Tevez with a brilliant high ball after Tevez saw his first attempt fizzled by Mexican goal keeper Oscar Perez. From here on the Albiceleste took a firm grip on the game while Mexico reached for the self destruct button 7 min after the opener. Mexico’s Ricardo Osorio must have been thinking about something completely unrelated to soccer when he passed a cross directly into Argentina’s Higuain’s feet and the Real Madrid striker accepted readily this gift leaving the grounded Perez without a chance netting his 4th goal of the tournament.

Argentina should have closed the door on Mexico before the half time whistle but Higuain wastefully headed wide with the goal at his mercy. Returning from teatime, Argentina continued where they left off and Tevez again proved that the Argentineans can score whenever they want with a marvelous strike into the top right corner.

Although Mexico must have realized that the game was up being 3 goals down, they continued with “verve” and conviction to attack and they should have pulled back in the 63rd. min. with a header that looked more difficult to get over the crossbar in stead of into the net. Just two minutes later the Mexicans got their consolidation goal with a stunning left foot shot high into roof of the net by Martin Demichelis. It would proof to be scant for the crestfallen Mexicans. El Tri returning home with their dreams dashed while Argentina can now plot their revenge against some very familiar foes.

The two World Cup contenders Argentina and Germany are now to meet and either side has to deliver proof of concept as their playing style preferences are not very different from each other. It’s going to be an interesting game that may have all ingredients of the finals but via time warp placed into the Quarter Finals.

Games Monday June 27, 2010
As statistics prove, the Netherlands never really liked to play the Slovakians and it is one of the few countries the Netherlands has a negative balance against. We’ll see it the Dutch can shake their ghosts from the past.

Chile will try to turn the tides to not lose against their South American rivals which all too often has been the case. Although expected is that the Brazilians have the better chances of booking their quarter finals than the Dutch, Chile is not going to give up re-writing the record books.