The last time we saw this happen, the Americas were still being settled and the Brits, French and Spaniards owned our country. 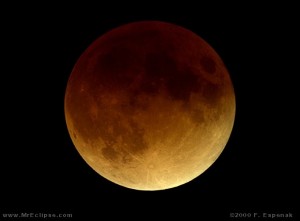 The last Lunar Eclipse coinciding with the Winter Solstice happened in 1638, that’s how special Monday night’s lunar eclipse was.
In itself a lunar eclipse is a very rare occurrence and happens when the moon passes into the earth’s shadow, which is created by the sun. Due to the casted shadow and the moon’s positioning in accordance with the sun, the moon turns a deep reddish brown.

When we came back from filming a commercial for next year’s Amelia Island Blues Festival around 5:30 Monday evening, a gorgeous brownish moon was already up in the sky, while the sun was still setting.

The lunar eclipse started at about 1:30 am Eastern Standard Time and lasted until about 5:01 am on Monday night. However, the full eclipse was only available from 2:45 until 3:50 and while the eclipse was potentially viewable by most of North America, due to poor weather conditions, many people were not able to see it as their skies were covered by clouds in the area. Here in Northeast Florida however we could and the show was spectacular as the contrast also made the other stars in the sky appear brighter than they normally do.

This morning the sun appeared at its lowest point in the sky, and its noontime elevation will appear to be the same for several days (before and) after the solstice. Hence the origin of the word solstice, which comes from the Latin word  “solstitium”, meaning sol, “sun” and -stitium, “a stoppage.” From here on the days begin to grow longer and the nights shorter.