You’d Better Get to Know Me Soon

This kind person was contacting me to show how I could call the bank using his name (which is also my own) and the bank will give me millions of dollars. 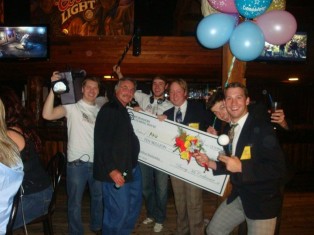 When I'm rich I will have lots of friends...so hurry

You had better get to know me now, because I’m about to become super rich, and will be the most popular person in this city, yea, even this state, and perhaps…anyway, you get the idea. And I’m going first class with everything, the best iPad, the best car and home…Nothing is going to stop me now, thanks to this strange quirk of luck. And to think that this morning I was just a normal, average poor person.

It happened when I opened my email even before brushing my teeth and got a special and urgent note from Ahil Mujsein. I immediately knew that it was from overseas when I read the greeting: “Assalamu ‘Alaikum.” What could be more authentic than that? That’s some kind of greeting for “hello.” I knew it was special when it said it was just for me (It had my name on it.)

The story in a nutshell. It seems that there was a banker who died at his desk, and he happened to have my same name (Imagine that!!). This kind person was contacting me to show how I could call the bank using his name (which is also my own) and the bank will give me millions of dollars that they had officially given to the banker before he died.

At first I decided not to read the rest of the email in case it was a hoax, but my heart caught the writer’s pain when he explained to me that his mother was very sick and I needed to get the money before she took a turn for the worse. To make matters even ‘badder’, his brother had been run over by a truck and his father had just lost all of his money in Las Vegas, and so he was about to be kicked out of his home.

Eventually I got up the nerve to ask a question in a return email: “Didn’t your brother see the truck coming at him? ” Of course not.” the writer answered, “If he had, he wouldn’t have gotten run over.” That made sense to me, so now I am busy putting all my personal information on an email that I will send to my new found benefactor, including bank accounts, social security and driver’s license numbers, which he needs to turn over to the bank so that they will release the money to me. And Mother of All That is Fair: all he is asking for all this trouble is 60% of any monies that I collect.

I’m going to be rich!

And talk about unbelievable luck, someone just rang my doorbell, and lo and behold, it was the Publisher’s Clearing House telling me that if I signed up for 3 magazines immediately, I would be put on a list and probably receive millions of dollars delivered by their truck, just like they show on TV.

I feel so lucky I’m going to send Oprah a request to be a member of her audience for “Her Favorite Things.” You had better get to know me now, because I’m about to get a lot of money and become real famous.