You’re so far away

When Mom lives 4,000 miles across the ocean, you celebrate Mother's Day in a melting pot of Holidays instead of a stand-alone tribute 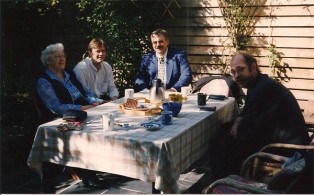 Surrounded by three of her five boys. Guess who took the picture?

I lost my mother when I was 53 and most people would say that I was lucky to have had her for such a long time. My wife lost her mom at age 22 in a senseless random act of violence and sometimes we have these discussions about the loss that we feel and the characteristics of not having a mom (or dad) to guide you when life really puts up some barriers.
That’s when I realize that I lost my mom at an early age as well. Probably as early as my wife did, because being the middle son out of five in a post worldwar 2 middle class Dutch family, takes the spotlights away from you quite early on in life.

Much later on I realized how much she had given in the early years and still did when I wasn’t even around to witness it anymore.
Mom gave and gave, of herself, of her wisdom, or her love and of her values.
She was intelligent beyond most people’ comprehension (even my dad’s), she was courageous, compassionate and understanding of human nature. Mom did not procrastinate or allow herself an excuse for not doing something. She didn’t raise her five sons under the Tough Love Laws, but somehow her intellectual approach to initiative, study and accepting life’s responsibilities worked grand for all five of us.

She never whined or depended on other people, even when life took her in and out of hospitals for the better part of 35 years. I think once I heard her say,” I wish I could be a little more dependent and have people on occasion cater to me or give me a bit more attention,” a role play her sister and a wellknown aunt mastered. It never worked out for her. She didn’t care about Mother’s Day or Valentine’s Day or any day that commerce created to allow us men to wash away our guilt feelings in one clean sweep, in the process depleting the bank account.

She also was deadly against the notion that it was only women who deserved attention on these days. Especially Valentine’s Day she considered an abberation of injustice against men.

Yes, mom was special. She told us, especially the three younger ones on several occasions, that if we found better things to do in life, to always consider that “the neighbors children were also nice” implying not to go into responsibilities of child rearing, if for any reason we didn’t feel up to the task. I don’t think she was ever disappointed about having children, she just was pragmatic enough to know that it was not a job for everyone.

Mom did not like weaklings who walked away from responsibilities. She would test you and verbally and intellectually push you around a bit, just to find out what you were made of. She likened me to the Michelin Man, you know the one that you knock down and keeps coming back up. I know the original notation for this came from the fact that during the first six years of my life I mostly saw the four walls of a hospital room going through almost every illness known to men (at least in those days). But then one day I bounced back and grew into a force to reckon with, every single early step guided by Mom’s lioness attitude.

She was my guiding light in the first 18 years or so of my life, but once college and playing music made me move away from home, contact became random once a month and when later I promoted corporately it turned into sporadic and when I moved across the Atlantic before I was 30, it dwindled down to a couple of days every other year or so. These were the years before internet and facebook and iPhone picture communications. A five minute phone call across the Atlantic was $50.

In those days I was too busy living life to the fullest, taking challenges to the edge and family had no consistent consideration. I never gave Mother’s Day much of a thought. I never got children of my own to get deeply involved in the practice of Mother’s Day either. I probably would have to admit to some form of ego centrism, if accused of that. But Mom told me once that it was not egocentric to be compassionate and understanding with the world. She called me the fairest person she’d ever known, and she wasn’t referring to my complexion. I guess she had bigger plans for me than even I understood

These days I do however watch my wife, the proud mother of six, and slowly it starts to dawn on me that motherhood is something most men will never truly understand. We may try to approach it intellectually, spiritually or intensely poetically, yet we will not grasp the essence of the process that takes place in the bonding between mother and child. Mother’s Day is intensely between Mother and Child.

I miss the years my mom and I didn’t have because my world grew so much larger so quickly and early on in life.  And with her power of curiosity installed in me as well as a disdain for everything herd-like, Mother’s Day vanished rapidly into oblivion. I only intensely interacted with her for about 17 years of my life, but those years were very formative.
It would be hypocritical to observe Mother’s Day beyond the context that I grew up in, but I will spend some time on my own terms with her this Sunday.