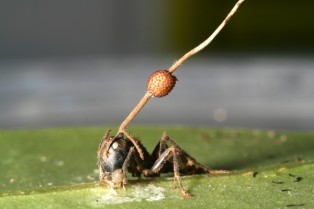 Of Ants and Fungi
EarthSky tells of Zombie Ants.

Image: A tropical carpenter ant killed by a parasaitic fungus in Thailand. The ant had bitten into the leaf in a “death grip,” and a fungal fruiting body with spores has emerged from its head. Image Credit: David P. Hughes, Penn State University.

It’s like something out of a horror movie. A parasitic fungus infiltrates the body of a tropical carpenter ant, feeding on it and manipulating its body. The fungus forces the dying ant to the forest understory, an environment more conducive to its growth. The invasion of this fungal body-snatcher culminates with it sprouting a spore-laden fruiting body from the dead ant’s head.

This brings to mind the eternal struggle between the economic means and the political means, as first delineated by Franz Oppenheimer in the early 1900s, and introduced to American readers by Albert Jay Nock in his book “Our Enemy the State” in 1935. There are two methods, or means, and only two, whereby man’s needs and desires can be satisfied. One is the production and exchange of wealth; this is the economic means. The other is the uncompensated appropriation of wealth produced by others; this is the political means.

The concept surfaced once again in 2010, with the publication of In Search of Self Governance, written by Scott Rasmussen, president of Rasmussen Reports. Within he argues that it’s not wealth, or color, or any of the usual suspects touted on the nightly news to generate friction between groups that defines the real class structure in America.

In reality, it boils down to those who believe in governing themselves, and those who believe the masses must be governed. Those who seek to live by productive means, and those who seek to live by political means. Rasmussen lays out three questions that define the real class divide in America. Answer the three questions below in your mind before reading further. Score a one for each question you answer yes; a zero for not sure; and a -1 if you answer no.

-Generally speaking, when it comes to important national issues, whose judgment do you trust more – the American people or America’s political leaders?
-Some people believe that the federal government has become a special interest group that looks out primarily for its own interests. Has the federal government become a special interest group?
-Do government and big business often work together in ways that hurt consumers and investors?

Also score a -1 if the question angers you, seems ridiculous, or seems too vague to be meaningful.

If you score a +1 or a -1, you may consider yourself as leaning toward the Productive or Political Class, respectively.

If your score is 2 or higher, consider yourself what Rasmussen calls the Mainstream, or, by Nock’s definition, what I choose to call the Productive Class.

If your score is -2 or lower, consider yourself what Rasmussen and Nock would both call the Political Class. I commend you for still reading, and not having dismissed this whole exercise as meaningless, because experience has shown me that is by far the most common reaction of those who score a -2 or a -3.

As Rasmussen explains:
Years of public opinion polls have shown a growing disconnect between the American people and the nation’s political leaders. Rasmussen’s conclusion: Americans don’t want to be governed from the left, the right or the center. They want to govern themselves. The American desire for – and attachment to – self-governance runs deep. It is one of our nation’s cherished core values and an important part of our cultural DNA. And right now, it needs to be saved.

Agorist (there’s that word again) Class Theory proposes that classes are defined along the same lines that Oppenheimer, Nock and Rasmussen have found. That it’s not about wealth, as the 99% believe, or about any number of things the 1% use to divide the rest of us through their news organs. It’s about using the coercive force of government to control outcomes in one’s favor.

And by now, I’m sure you understand why the lead-in of the Ants and Fungi triggered this column. My apologies to any of the Political class who haven’t yet thrown their computers across the room in disgust. I’ll try to be easier on you in the future, if you’re willing to hang in there.

…and that’s all I have to say about that.